Home » Blog » The Power of Us
Blog

For this quarter, we have chosen what we hope will be an interesting topic for everyone: diversity and crowd sourcing. Diversity is a word often thrown about in terms of public policy and the need for representation from various ethnic and other groups in society. While that is an admirable goal that is not the same perspective we discuss now. The diversity discussed in public policy discussions is often presented with a goal of fairness. The perspective we offer on diversity here is one of solutions to specific problems, often where experts fail. Crowd sourcing is a term used to describe the phenomenon where a crowd, often of unknown makeup, brings a solution to a specific problem. An entrepreneurial economy can also be an example of crowd sourcing on a broader scale. More simply, posting a survey online with four potential titles of a book and choosing the title based on survey responses is an example of crowd sourcing.

The survey example is not one where there is a “right” answer; the title is a matter of personal taste. Such an answer is certainly relevant when selling a product to consumers but the solution isn’t one which can be confirmed empirically. Crowds also have the power to produce mathematical or other solutions. This has been referred to as the “wisdom of crowds” and was addressed in a book by Scott Page titled The Difference and also discussed by Michael Mauboussin, the investment strategist for Credit Suisse, a large financial services firm and investment bank. We borrow generously from Mauboussin’s article Explaining the Wisdom of Crowds and Page’s work in our discussion here.

Michael Mauboussin discusses his estimation experiment where he asks college students in his class to guess the number of jelly beans in a jar. He has run the experiment for many years and every year the average of the answers provided by the students has been within a few percentage points of the actual answer. The crowd achieves the solution even though no one knows the answer because the poor guesses are few and the better guesses by the group are more common. As the guesses are tallied, the estimates closer to the correct answer become more numerous and answers deviating above and below the correct one begin to offset each other. In the majority of such experiments the average is more accurate than any individual guess. In Mauboussin’s example, only 2 of the 73 guesses were closer to the correct answer than the average. 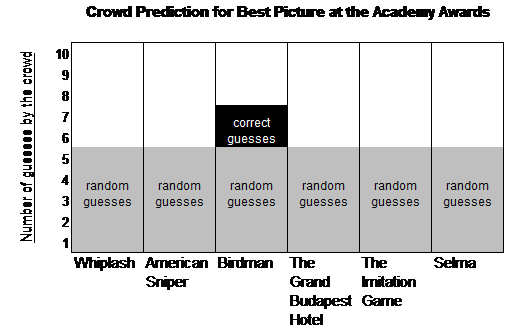 Crowds can also be effective in answering trivia questions or making predictions such as the winner of the Academy Awards for Best Picture (table on at right). In these cases there are a set number of possible answers from which to choose. In a diverse crowd, the larger the better, some will have specific knowledge of the subject and make more accurate guesses. Those without specific knowledge will make incorrect guesses that will be random so that the correct guess rises above the rest as shown in the nearby chart.

The power of crowds can also be seen in some of the most successful public companies in the last decade where crowds create the product. Imagine owning a retail store where strangers walk in every day and put products on your shelves for free that you then sell to someone else for a handsome profit. Web sites like Facebook and Pinterest are repositories for content generated by users (the crowd). Sites like Yelp and Angie’s List offer reviews made by others so new consumers can make more informed decisions. YouTube delivers 3.3 billion hours of video to viewers each month. All videos are provided by users for low to no cost as compensation, from advertisers, only occurs if there are a significant number of views.

Entrepreneurial economies like the United States also illustrate the power of crowds. Each new business or invention is much like a lottery ticket. One may be the next Intel or Facebook or McDonald’s that leads to powerful economic growth and employment opportunities. Many will fail but new “tickets” can still be purchased by the same entrepreneurs and many will offer some modest growth with a positive impact as a whole. The Small Business Administration reported that as of January 2015, roughly 7 million of the 11 million jobs that were created since the last recession were done so by small businesses. The power of crowds is everywhere. 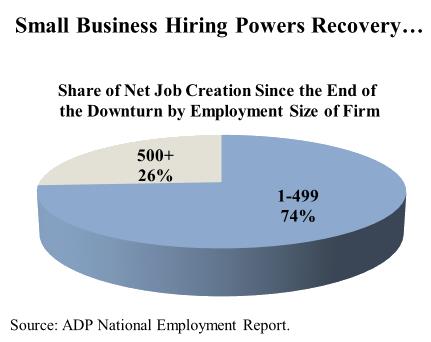 The investment implications are also worth considering. Companies driven by content produced by crowds can be very attractive due to their high profit margins but, like all investments, we must consider the valuation at the time of purchase as valuation is one of the greatest determinants of long-term returns. Furthermore, an understanding of a company’s ability to protect itself from competitors and maintain its crowd provided content is very important.