Fall is peeking around the corner at us and we look forward to trading in our sunscreen for mugs of hot chocolate.  Some time ago we began separating our letter into two sections, a brief overview of market returns and key news items, followed by a “Deeper Dive”, a more detailed view regarding one theme we find of particular interest.  We hope you enjoy both.

The third quarter of 2016 offered positive returns with minimal stress, unlike prior quarters. The broad equity indexes had mixed results.  For the quarter, the S&P 500 and Dow Jones Industrials increased 3.9% and 2.8%, respectively, while the NASDAQ Composite increased 10.0% due to its heavy exposure to technology, one of the strongest areas of the market.

Interest rates rose for the quarter.  The yield on 10-year Treasuries ended at 1.60% compared to1.49% at end of last quarter.

OUR VIEW OF THE MARKETS

While the S&P 500 Index hit a new all-time high in August of this year, earnings growth for the index has been negative for five consecutive quarters and the upcoming quarter may also fail to deliver growth. Earnings for the index have been negatively impacted by losses in the energy sector but many other sectors have failed to generate earnings growth. We have mentioned before that the equity market is a complex system impacted by many variables with earnings being only one of the essentials.  We continue to believe that the low interest rate environment is lending support to the US equity market and may continue to do so for the rest of the year. Even so, we focus our research efforts on companies with above average growth prospects and valuations that are more attractive than the market as a whole.

The P/E ratio of the S&P 500, an indicator of valuation, is still high and tempers the enthusiasm we have for some of the attractive stocks which we have found in the past quarter. As of the end of the second quarter, the trailing P/E of the S&P 500 is 25, up from 22 at the end of 2015. A closer review of the various groups in the market reveals a disturbing trend which we have discussed previously: the high cost of stocks with dividends. Ned Davis Research shows that the median P/E for stocks in the S&P 500 that pay dividends is 46% above the long term average. The same measure for stocks that pay no dividend is at its average level. The low interest rate environment is causing many investors to reach for yield without regard to valuation. Valuation rarely matters in the short term but is always an important factor in long term returns. 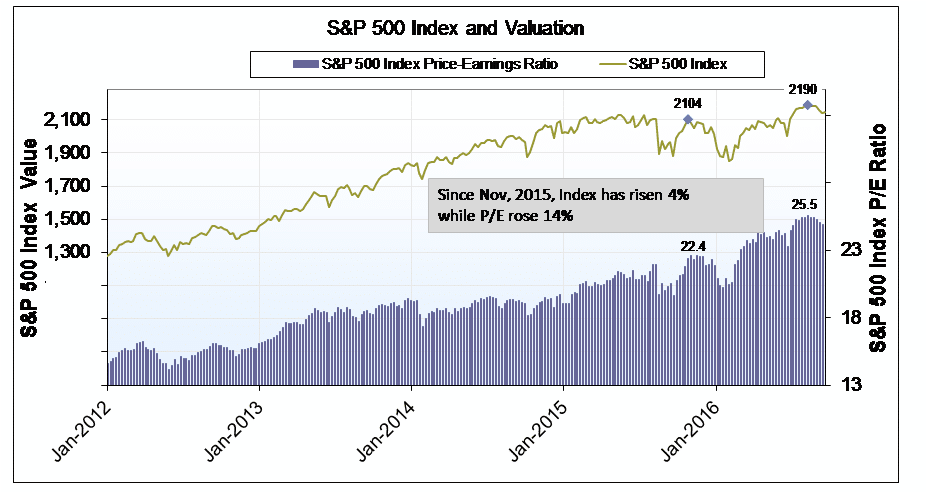 During the quarter, the Federal Reserve voted to leave interest rates unchanged at the regular meeting in September, a move that was consistent with expectations. Many believe the Fed did not want to take any steps that might influence the upcoming presidential election. A rate increase is expected at the December meeting.

The high valuation of the major equity indexes is a measurement that we cannot ignore. However, many other factors that tend to be present before the market weakens have not yet begun to materialize. Most stocks have been rising with the index and information from the bond market shows that debt for riskier companies is well supported by investors. Our goal is to provide competitive returns to our clients with a focus on preserving capital during difficult periods. We believe our research process and discipline are an important part of achieving this goal.

ALSO IN THE NEWS

We would like to highlight a few news items that we believe are noteworthy.

Should we bank on European banks? Shares of Deutsche Bank (DB), down more than 40%, and other large European banks such as Barclays (BCS), down more than 20%, have had a terrible year. In recent weeks, the financial press has focused on Deutsche Bank, the subject of a lawsuit by the US Department of Justice for its part in the mortgage crisis of 2008-2009. The DOJ is seeking a penalty of more than $14 billion which would eat into the bank’s capital that must be held to protect it from loan losses. In the last week of September, rumors were circulating that several large hedge funds began moving investment positions and cash away from the bank. Some comparisons have been made between Deutsche Bank and the condition of Lehman Brothers before its collapse eight years ago. The comparison is a tempting headline but by any measure Deutsche Bank is in better condition than Lehman before its demise. Deutsche Bank has a much more diverse customer base than Lehman and it also has the ability to obtain temporary capital from the European Central Bank. We do not own Deutsche Bank in client accounts.

Cars without drivers? Uber, the privately-held ride hailing service that has emerged as major competition to traditional taxis, began offering rides in Pittsburgh last month in robot-driven cars. Pittsburgh is the location of Carnegie Mellon University which is home to one of the world’s most well respected robotics programs. Sebastian Thrun founded the self-driving car project at Google and spent seven years at the university developing autonomous robots. Many view Google as the leader in the field as it has been testing self-driving cars for several years but Uber is the first company to offer a larger public test like the one in Pittsburgh. Each car is attended by a “safety driver”, an engineer in the driver’s seat able to take over at a moment’s notice. The cars are Volvo XC90 sport utility vehicles equipped with dozens of sensors. Volvo and Uber have an agreement to spend $300 million jointly to develop autonomous cars and Volvo is expected to deliver 100 of the SUVs by the end of the year. A fully autonomous car isn’t expected until 2021. Google’s self-driving cars, which have been operating longer than Uber’s, have been involved in a handful of accidents. Uber’s project in Pittsburgh has so far been accident free, but is in the early stages. Furthermore, Uber reports that 1.3 million people die in car accidents around the world each year with the majority resulting from driver error. An elimination of human drivers could save lives and boost productivity.

We welcome your thoughts and comments and are honored that you have chosen MONTAG to manage your investments. Thank you for the opportunity to be of service. We hope the additional material, focusing on the initial public offering market, is useful to you.