The capital markets offer all kinds of opportunities, with commensurate risks, for investors and are a great place to build wealth. However, all portions of the capital markets are not created equal. The market of initial public offerings or IPOs is one of these areas where the returns are asymmetric.

When a company first issues stock to the public it is called an initial public offering (IPO). The money raised is often used to invest in the business, develop new technologies, or expand existing areas of the business. We reviewed a basket of 629 companies that went public between March, 2009, and August, 2014, and their subsequent returns.  The companies were from different sectors and spanned all sizes. All ETFs, limited partnerships, and REITs were excluded. The nearby table shows the number of companies categorized by the size of the initial offering. Roughly two-thirds of the companies that went public during the time period reviewed were below $150 million in market capitalization, small companies that generally go unnoticed by the financial press and most investors. Conversely, only ten companies were $2 billion or more at the time of issuance and received substantial attention. 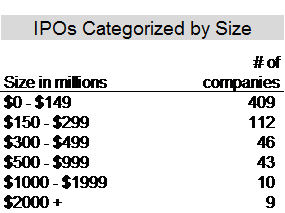 The financial press seems to enjoy IPOs a great deal and large IPOs, such as Facebook (FB) and Twitter (TWTR), were almost like watching the rise of a rock star. All objectivity seems to be lost in such events. This is an especially poor environment for investors as separating fact from fiction is difficult given that the company issuing stock and its investment bankers hold all of the information. It is rare to see substantial amounts of dissent as a company issues stock for the first time. The company must present audited financial results for several years and is subject to a laundry list of SEC regulations but none of this information is directly supportive of the investors about to buy the newly minted equity. As we have stated before, valuation is incredibly important.

If an investor purchased every IPO and held it for 24 months, they would have received the solid line (nearby chart) and outperformed the S&P 500 Index by 1.3%. However, buying and selling more than 600 stocks over 5 years would have generated a substantial amount of trading commissions which would, in turn, reduce or eliminate much of that outperformance. The group of IPOs had a small number of companies with high returns that helped generate an average return that was positive. If we look at the median relative return (dashed line in chart), which corrects somewhat for the impact of the few large returns, we see a much different picture. The median relative return was negative 18% when compared to the S&P 500 Index over the first 24 months. Roughly 55% of companies in the sample performed worse than the S&P 500 Index in their first 2 years. It’s also important to note that 37% of issues produced losses of 20% or more for investors by the end of the first 24 months. These losses were not concentrated in small stocks. 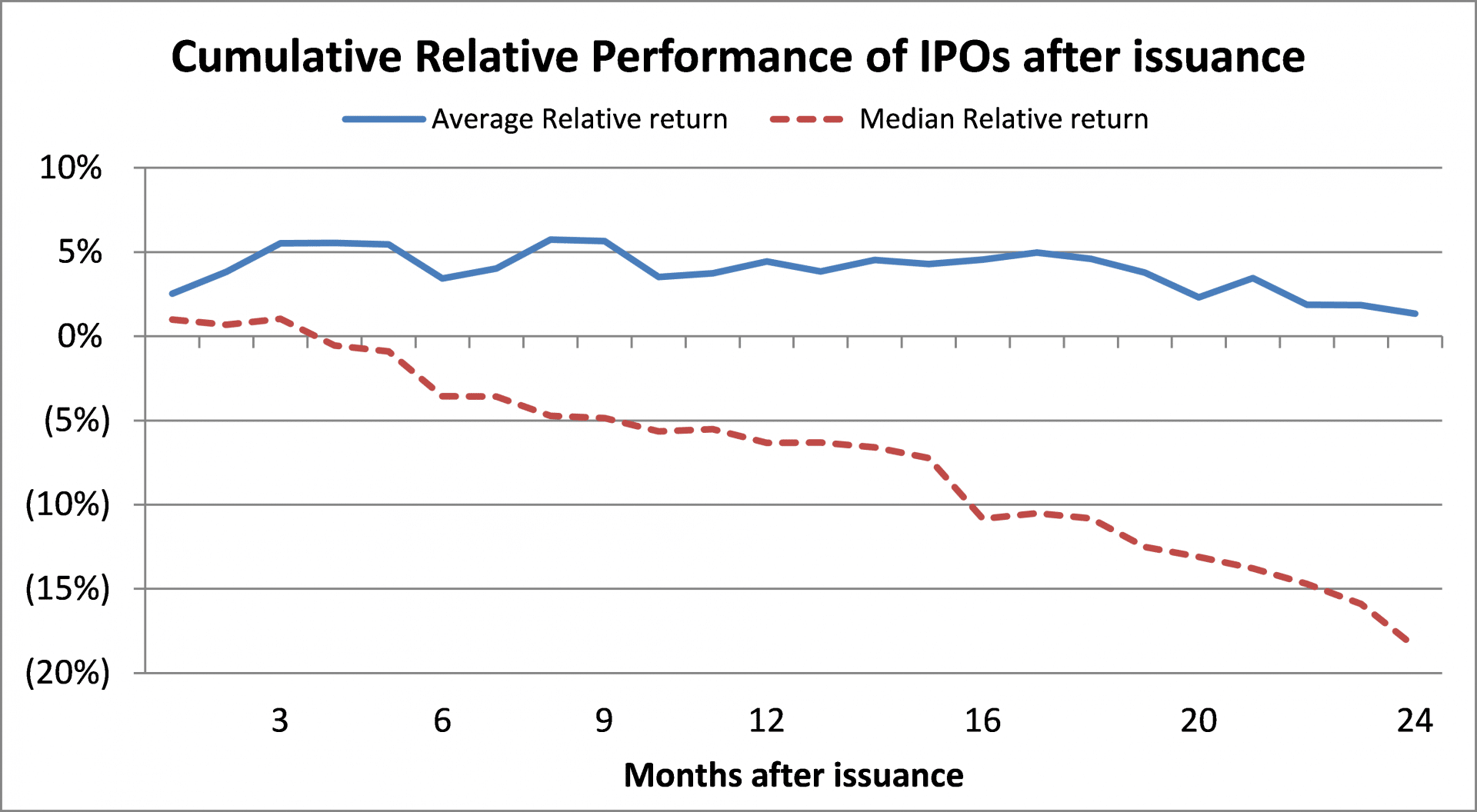 It may be somewhat surprising to see the disparity in performance between large and small companies. Smaller companies had higher average relative performance. The table below shows performance by different size categories with the three smallest categories producing positive and notable outperformance. The two largest are substantially negative. This is not an indictment of the quality of the companies reviewed but, we believe, an indicator of the size of the marketing machines that support huge IPOs. When Facebook needs to raise money, it uses several of the largest investment banks with lots of interviews on CNBC and in other financial press outlets. When “Bob’s Barbeque Hut” (a fictitious company) wants to issue equity to expand from 10 to 30 restaurants, it’s unlikely that Bob will be able to muster a similar army of sales people. Remember, the goal of the company and its investment bankers is to get the highest value possible for the amount of stock being issued. Investment bankers and company management do not receive a bonus at the end of the year if investors that bought on the day of the IPO make large returns. 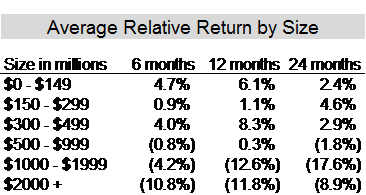 We will conclude with a look at the ten largest IPOs during the period, including some names you may know. The table below shows absolute performance for various periods of these companies. Only two companies produced positive returns after 12 months. After 24 months, there were only two with substantial positive returns, Facebook and Zoetis, while four produced losses of 25% or more. It’s important to note that Facebook did produce losses during its first year after issuance. The data presented are a great reminder of something we discuss often in our letter and with our clients: valuation is important. The right company at the wrong price is almost always a poor investment. We spend many hours reviewing companies for possible investment and our assessment of the stock’s valuation is an important part of the process. The IPO market is a great place to raise capital for new businesses but we believe it is far less beneficial for investors.