The United States is now administering a little over 1.1 million vaccine doses per day. That’s pretty remarkable given we were only giving out about 450,000 at the beginning of the month. Based on comments about expanding manufacturing capacity from Moderna and positive initial data from Johnson & Johnson on the efficacy of its single dose vaccine, these numbers will continue to improve.

As COVID cases increased in November consumer confidence and spending started to fall from post pandemic highs back to lows last seen in the early summer. You may have seen the employment report from early January that showed an increase of unemployment claims to about 965,000. Most headlines on this number were negative since it grew for the first time in a while and we had expected the number to go down and not up by about 160,000. What has been less reported is that excluding the areas of the economy most hit by the pandemic – leisure and hospitality – employment actually increased by 350,000.

In fact, wage income has been growing steadily through the year as the economy has re-opened from its shutdown in March and April. The good news is that when the latest round of stimulus checks get deposited, consumers will have $3.46 trillion in the bank or about $2.2 trillion more than when the pandemic began. So, the consumer has cash but will they spend it?

Luckily, China got control of the virus earlier and opened its economy over the summer, so we can look at what happened there for what our future might hold. China closed their movie theaters from January to July of 2020. By the end of this last year, attendance was already back to 90%+ of pre-COVID levels. Air travel within China tells a similar story – once down 80% but now down only 16% from 2019 levels. 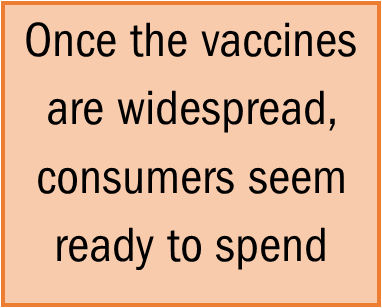 More important than China, what have US consumers done when given the option to spend? Visitors to Vail Resorts (Ticker: MTN) were down 16% in 2020 when compared to 2019. The more important story is that ski passes for 2021 are 20% higher than they were in 2019. Restaurant traffic is about 56% of what it was last year. But that’s the average for the whole country. California traffic is only 8% of what it was before the virus and New York is only 25% of 2019 levels. Florida, on the other hand is only off 30% and that’s with tourism down sharply. Once the vaccines are widespread, consumers seem ready to spend. This spending will likely occur in the very industries most hit by the virus – travel, leisure, restaurants. All of this will drive employment growth and income.

Income growth, which runs about 3% a year, was stable in 2020 due to government. Due to consumers increased savings and a very resilient stock market, the average person’s net worth increased about 8% since the end of 2019. Spending, which is down 2% over this same time, usually follows net worth and has a lot of catching up to do.

The consumer has cash and will spend it as confidence returns with the roll out of the vaccine. This will drive employment and an increase in earnings for companies. 2020 went out with a whimper. 2021 and beyond are setting up to roar.