The headlines ranged from excited to euphoric to apoplectic – in that order – before and during this period when S&P500 companies report earnings for the first quarter of 2018. Many investors and observers were thrilled to have this earnings season arrive, in part to refocus attention on the economy rather than tweets, politics, etc.  Well earnings season is here, stocks are falling, and people are howling.  It’s a good time to look at why each are happening, and see what we can learn from it. 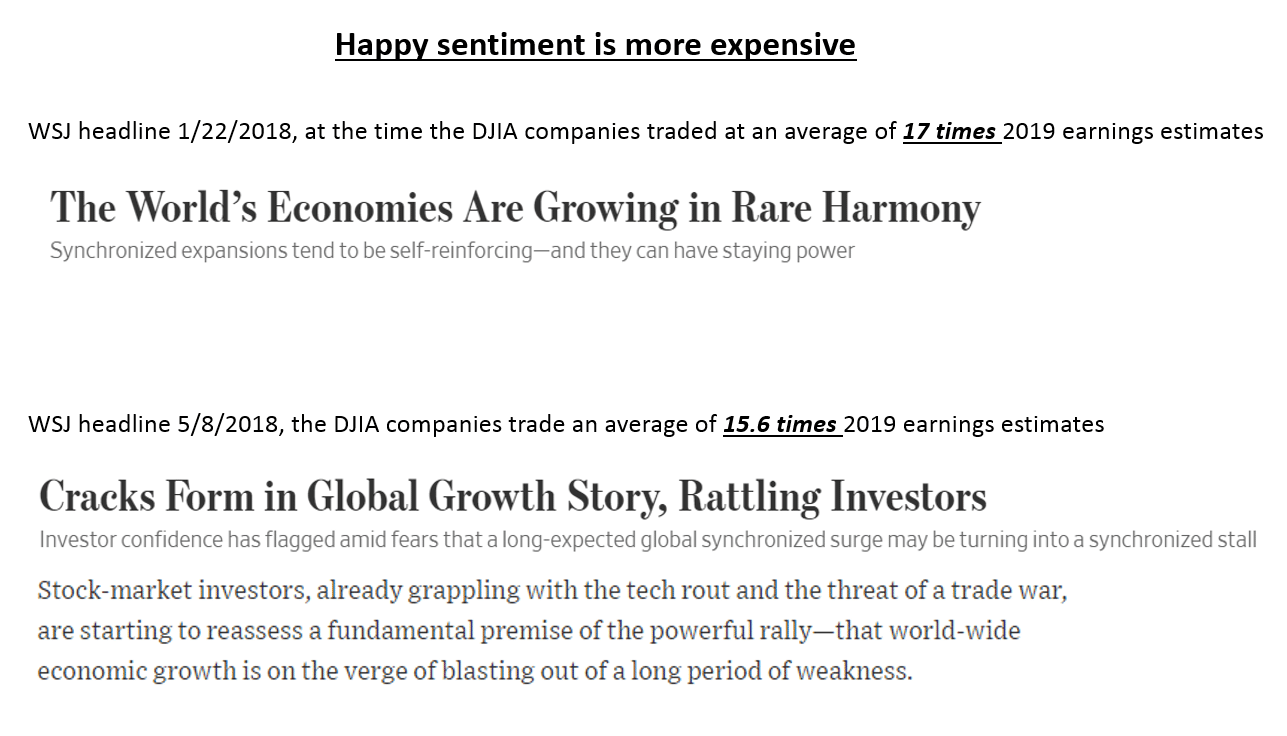 First and foremost is that quarterly earnings reports mainly reflect the past. They also involve what the company says about the future, and that more than anything is what’s impacted many stocks lately.  The chart below shows the Price to Earnings ratio (a measure of investor love, or excitement about a company) for two major Dow Jones Industrial Average companies.  These two stocks saw their forward (based on next twelve months’ earnings) PE ratios expand from 17 to 24 and from 20 to 26, from the November 2016 elections through January 2018.  Massive moves upward in investor excitement, but also expectations.  Not only that, but the Tax Cuts and Jobs Act significantly boosted the 2018 and beyond estimated future earnings of these companies solely due to a lower tax rate.  Nothing operationally is different. So it’s a double whammy of enormous expectations (PE rising) on top of enormous expectations (further earnings growth above current estimates) in the face of an economy possibly in the late stages of an economic cycle.  This last point is critical, and it is unknown, but it has affected the market and is reasonable.

Long story short, earnings season arrived and companies reported exceptional results and had generally positive things to say about the near-term outlook. A common challenge has been significant increases in wages, trucking/freight, and input costs, but for the most part companies have insisted that they will recoup a good bit of these costs by passing along price increases to customers.  It should be noted that a growing number of companies, and not just in consumer staples and foods, are taking restructuring actions to permanently reduce their workforces in the midst of these input pressures, as not all of these increases can be passed along to customers.

So that leaves the future as the biggest question. Company forecasts were generally upbeat, but not rosy enough to justify the run-up in valuations prior to these reports.  It leaves investors wondering whether the rate of change in earnings estimates has stopped going up, and if that happens then what is the effect on valuations?

In terms of the big macroeconomic picture, one of the scariest things I see is the rather widely accepted view that the biggest risk is to the economic upside. Over and over, big-time investment professionals share their views (Jamie Dimon among them) that these are the main issues:

-The Fed might increase rates too slowly as inflation heats up, meaning they will be behind the curve and have to raise rates more aggressively to catch up to runaway inflation.

-The Fed acting too aggressively due to currently increasing inflation and the hot economy, raising rates too quickly and thereby pushing the economy into recession

So in essence, in either case the worry is that the Fed does the wrong thing in the face of an economic environment where everything is amazing. But what if everything is not amazing?

There’s a chance that the action in the stock and bond markets reflects another possibility that is less discussed:

-The Fed overestimates the strength of this economy, which is near the 9th inning of its expansion, and will continue hiking interest rates into a market that cannot tolerate it.

The bond market started to show its worry in late January, and that “risk-off” mentality from bond investors has been a stock headwind ever since. With a 40 basis point jump in the 10 year treasury yield and a nearly 30 basis point spread-widening (like a stock’s PE ratio falling, to compensate for risk) on top of that, this year has presented investors something they’d not dealt with in some time – their stocks retreating with their bonds falling as well.

The chart below, from Goldman Sachs, and many others like it are trying gauge the chance of an upcoming recession. We are best served though, by assuming that the chance of a recession in the next twelve months is always higher that 1 in 20, the current estimate. 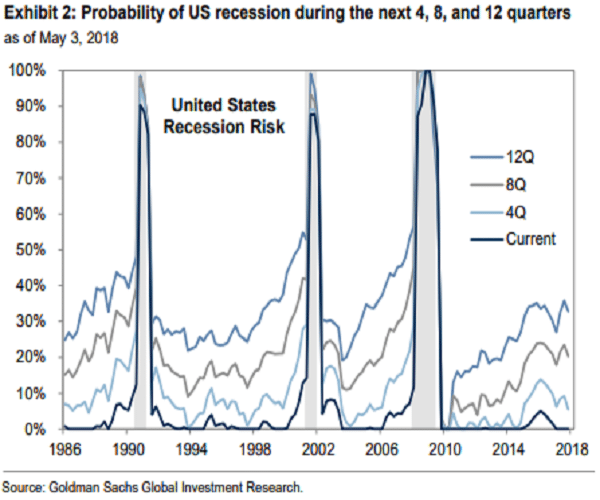 I have few predictions to make or issues to resolve for us as investors. The likely path for the market hinges on company profits, and whether they trend higher or lower.  Widespread uncertainty can be our friend, but so can widespread certainty, if we question it and have a game plan should it turn out to be incorrect.