Inflation Bites, and is Capitulation in Sight?

A day after Walmart’s weak earnings, Target’s results sent a shudder through the markets Wednesday 5/18, with the S&P500 off 4% and flirting with a bear market.  Inflation headwinds have been discussed for months, but investors reacted “strongly” after seeing the earnings impact of what had been more of a “high level” concern for investors.  The ability of corporate America to pass along inflation and manage logistics and shipping costs may have been overestimated by many investors, and the market has reacted swiftly.

In order for a bottom in stocks to be put in, we look for capitulation. In the March 17 blog post, I quoted Sir John Templeton when discussing the process of weakening investor sentiment:

“I regarded my own fear as a signal of how dire things were,” said Mr. Templeton, a deeply religious man. “I wasn’t sure they wouldn’t get worse, and in fact they did. But I was quite sure we were close to the point of maximum pessimism.”

I thought of that quote when reading a morning email from a Wall Street research and trading desk that defined the May 5th market reversal (huge drop after a long-awaited big bounce the day before) as “disheartening and soul crushing.”  Certainly sounds like some capitulation and investor enthusiasm has burned off.

As for fundamentals, where do we stand?  Well the trend in earnings-per-share (EPS) estimate revisions is likely lower for most sectors.  As discussed in March, we remain interested in how inflation rolls though the economy.  The Q1 earnings reporting season gave us some insight.  Walmart (WMT), with a lower-income consumer, has a limited ability to pass through high logistics and supplier cost increases to their customers, and it showed up in an earnings miss that caught Wall Street off-guard and sent shares down 12% on 5/17.  Home Depot (HD), on the other hand, has a slightly wealthier customer base and their professional customers have big backlogs.  Despite a slow start to spring causing total transactions to fall 8% from the prior year, HD’s average ticket was up 11.4%.  Meanwhile, Target (TGT) stunned investors yesterday (5/18) with a substantial earnings miss, blamed on “much higher than expected” rate and transport costs, as well as customers shifting spending away from discretionary areas like apparel and home goods.  WMT and TGT both enjoyed significant growth the past two years, and may have been a bit aggressive in building out fixed costs and the employee base, in relation to current demand, a dynamic that also hit Amazon.

As for the concept of a recession, what’s interesting to consider is that Walmart and Target’s results both showed growth in sales – a positive for GDP – but staggering inflation headwinds that hinder margins and earnings growth.  The point being, steady or even mildly negative GDP could mask the damage being inflicted on both corporate profits and consumers.

Companies that have done well, such as Analog Devices (ADI) in the semiconductor space, are still not out of the woods, as they may be currently benefiting from “catchup” demand that could eventually be negatively impacted by the same demand destruction other companies are facing.  But being a component maker, responsible for only a small percentage of the total cost of a car or device, can be an advantage when pushing through price hikes.

One way or another, inflation will likely peak and recede, and it’s possible we’re past peak; demand destruction will roll through the economy in different ways.  Unknown will be to what extent permanently higher inflation should be expected in critical areas such as basic materials and or critical raw materials.  While scarcity and resource nationalization would push prices higher, global demand destruction due to elevated prices will work in the other direction.

Returning to the question of potential market downside:  Importantly, different stocks, sectors and styles will behave differently at different times in the economic cycle.  The first stocks to get hit are the most speculative and least profitable.  The crop of high-growth disruptive companies who entered the public markets in the past 2 years were in a precarious spot.  Like others before them, be it Amazon or Tesla or Netflix, they were coasting on the good graces of investors until they could become more financially stable on their own.  Or as Bloomberg’s Kevin Tynan said of Carvana:

“It’s almost like ‘fake it until you make it.’  You get rewarded with valuation, and you can kind of grind your way to profitability and hope the bottom doesn’t fall out.”

Unfortunately for some, the bottom fell out and may necessitate raising life-saving capital at low, dilutive prices and terms.  Some will rebound substantially, and some will not. 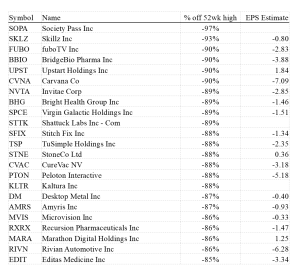 What’s hit the market in recent weeks has been the rolling over of “the generals” as some put it.  The perceived invincible companies that dominate the market indices, such as Apple at 7% of the S&P 500, Microsoft at 5.5% and Google at 4.5%.

At peak earnings and multi trillion-dollar valuations, the generals became viewed as a very safe investment for investors – even “defensive,” and for good reason.  Their earnings have grown swiftly, they’re highly valued by customers, and their earnings have become less volatile than the rest of the market.  All that, plus lower interest rates, leads to higher investor love, expressed as a their Price/Earnings (P/E) ratios.  Each has burned off some of that excitement, as has the market as a whole. 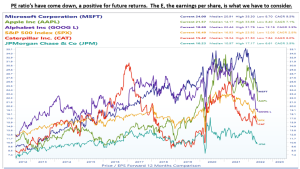 Investors became conditioned, by an accommodative Fed, to “Buy the Dip” for the past decade.  So, we keep that in mind, but also advantage ourselves by being more thoughtful than “just buy the market.”  Plenty of companies have great long-term outlooks, and periods like this offer a chance to buy shares in premium companies at middle-of-the road valuations.  Buying on pullbacks feels great but still comes with the possibility that you’re early in the down-cycle.  If one can get past that, the long term still looks good.