In the later stages of a bull market, acquisitions tend to increase in size and number. Many companies are more profitable as the economy has been growing for several years and they are flush with cash so shopping on a grand scale is hard to resist. Over the next few weeks, we are going to review several kinds of acquisitions and discuss which ones tend to create value for shareholders and which tend to serve only to create value for the investment bankers that handle the transactions.

Successful acquisitions often fall into one of three categories: roll-ups, prepaid R&D, or hub and spoke. Note these names aren’t universal; other professionals may use a different name for the same type of deal. Valuation of the acquisition target is often the focus of investors, which is wise, but the type of deal offers valuable context for the valuation or price paid. What the acquirer can accomplish or create with the acquired asset is far more important than what the target company has accomplished in the past; i.e. their trailing earnings. A lump of clay in the hands of a gifted sculptor can make that clay more valuable. In my hands, it would just be wet dirt. 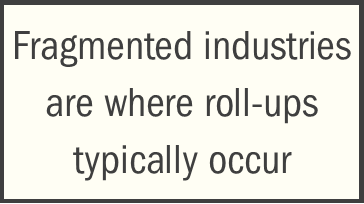 A term that is widely used is “roll-up”. This refers to the practice of one company acquiring lots of other similar companies (usually smaller) in an industry that may not have a large player. The idea is that there isn’t a lot of work to do after the purchase so the acquirer can simply roll up the business like a map. In an industry where no company produces more than 10-15% of the entire industry’s revenue the industry is said to be “fragmented”. Fragmented industries are where roll-ups typically occur.

The soft drink industry in the US is not fragmented today but it was a hundred years ago when different regions of the US (and the world) had a favorite soft drink produced by a local company. Today the industry is dominated by Coca Cola (NYSE: KO) and Pepsi (NASDAQ: PEP), both of whom have acquired many of those former regional players. For a roll-up to be successful, the consolidation or adding together of various companies must bring some advantage. Typically, there are significant costs that can be shared which reduces the cost per dollar of sales. With the soft drink industry, a large player would be able to gain discounts from suppliers for purchasing the ingredients to make the product (sugar, flavorings, etc.). The end product also must be delivered to a reseller, such as a grocery store, and maintaining a fleet of delivery trucks can be expensive. If those expenses are spread across more sales, the profit per unit rises.

The key to success is to pay enough to win the deal but not so much that the cost benefits are overwhelmed. The failed roll-ups I’ve seen in the past usually failed for two reasons: debt, or a failure to integrate. The sales pitch for a roll-up strategy can sound like magic to a banker: “buy $1 of assets, wave a magic wand, and you have $1.20 in company value” after the acquisition. Many investment banks jump at the chance to provide debt financing in these cases but the risk can rise to uncomfortable levels if the acquirer tries to make too many purchases in a short amount of time and the industry is highly cyclical. Cyclical businesses are those where sales are very dependent on the overall trend of the economy. A dry-cleaning business, for instance, offers services used frequently by office workers. If an acquirer borrowed lots of money over a number of years to roll-up the industry and a recession occurred causing many office workers to lose their jobs, revenue and profits would decline and the interest payments for the high debt load might be too much for the acquirer. Sometimes bad things happen to good strategies.

A failure to integrate can result in growing pains years down the road. Some management teams believe investors want to see growth at all costs, so if revenue is rising and earnings are rising everyone should be happy. This might be true in the short-term but if management refuses to take the time to properly integrate the newly acquired companies, the resulting company in several years might look like that tangled pile of rubber bands and paper clips in your desk drawer. It might be useful with a bit of work but right now it’s a big mess. Integrating an acquired company, even in a simple business, involves changing software systems, creating margin stability and improvement, and migrating operational cultures of the acquirer. Integrating one or two companies at a time is manageable but waiting until 10 to 20 have been purchased and then trying to integrate them can be a disaster. Few investors will wait patiently while management tries to untangle the mess.

Incentives for management are also important with all types of acquisitions. Are bonuses for management tied only to growth in earnings per share or do other factors exist which cannot be improved simply from acquiring companies? Evaluating the proxy statement filed with the SEC which outlines management compensation incentives can tell investors much about what to expect. Borrowing money or using shareholder’s hard-earned cash to buy companies simply to increase earnings per share without a good long-term strategy rarely results in a high-quality long-term investment. It does generate some nice news headlines though. Management teams that are more interested in headlines than operating their business should be avoided.

Having considered the opportunities and potential pitfalls of the roll-up acquisition strategy, stay tuned for a look at the pre-paid R&D approach in our next installment.