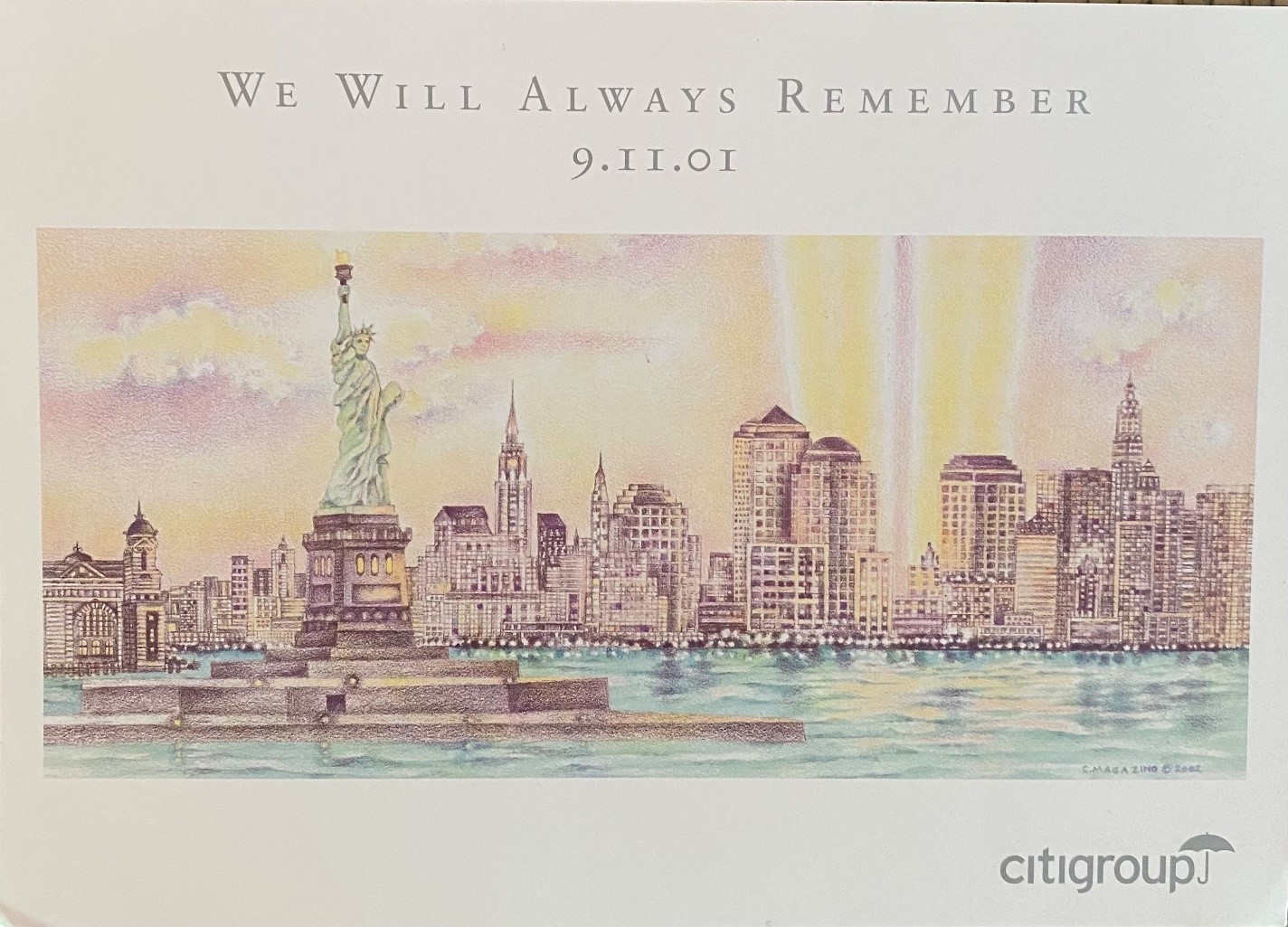 The morning of September 11, 2001 was one of those tragic events in our lifetime we will never forget. Everyone remembers where they were, how they first heard, how they felt in the hours, days and weeks that followed. Everyone knew someone or knew someone who knew someone that was affected or impacted by that horrific day that changed our lives forever.

I was 23 years old working for Smith Barney Asset Management buying municipal bonds on their Money Market trading desk. At 8:46am, I was on the 43rd floor of 7 World Trade Center doing a trade when our building shook and rumbled. Without hesitation, we ran for the stairwell. Cell phones were not working and we had no idea the severity of what had just occurred. The more senior member of the team assumed it was a bomb because they were there in the WTC for the bombings in 1993. I ran down 43 flights of stairs in 4-inch heels and into the lobby packed with employees. That was when the 2nd plane crashed into the South Tower. Security was rushing us out the back of the building through the loading dock because the front was filled with falling debris, papers, and people. I tried not to look. My boss said that the tower was a quarter-mile high so we didn’t stop running until we reached the apartment of a co-worker. The news informed us that terrorists had flown planes into the buildings on purpose and that the Pentagon had just been hit as well. We took turns using the landline to call our loved ones. As I stepped out onto the balcony I watched the South Tower collapse and the streets between us flooded with smoke. In the air, sirens were ringing from every direction, car radios were on high so all onlookers could hear the latest update, and shrill screams and tears of despair echoed in the background. 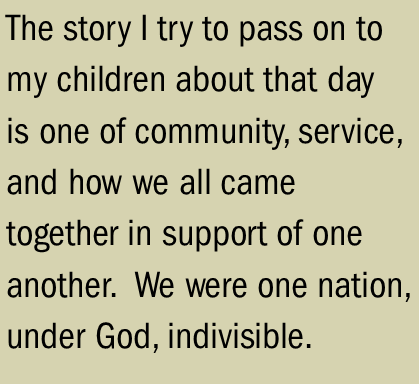 My building, 7 World Trade Center, collapsed at 5:20pm that day. All employees were accounted for. My story is pretty benign when I think of the gravity of that day. I escaped with nothing more than sore calves. Everyone I knew in all the towers survived that day. It doesn’t begin to depict the thousands of lives lost nor the children, spouses, and families who suffered the ultimate loss and whose lives were never the same.

However, the story I try to pass on to my children about that day in history as they begin to learn about it in school, is not that of a terrorist attack on our country. It is one of community, service, and how we all came together in support of one another. We were one nation, under God, indivisible. During those weeks that followed, we all had something in common, we were in it together. We all had the heartache, the angst, the confusion, and an unwavering pride in our country. The flag of the United States of America was hung high from every flag pole, draped out of windows, holstered out of apartment balconies and fire escapes all throughout the country and it meant something. It was a symbol of our unity. That is why I choose to “never forget” about this day each year and what I hope to pass on to the next generation. To the First Responders, and to the nearly 3000 people who perished that day, I will always remember.

Amy is responsible for overseeing all fixed income investments at MONTAG. These responsibilities include research, selection, and trading of individual bonds, mutual funds, ETFs and other securities designed to meet the income and capital preservation needs of MONTAG clients.