Much has been written and discussed about US trade wars and tariffs – what might be the impact on our economy (or parts of it) –  and how trade wars might impact equity markets. First, let’s look at some data.

Putting the Trade War in Perspective.

The chart below shows trade and tariffs between America’s major trading partners. 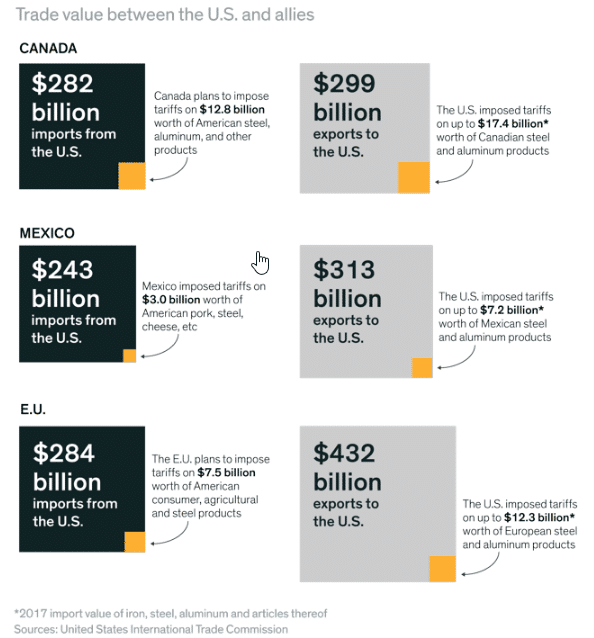 The above information, plus China, is shown in the table below in terms of imports and exports between each land and the USA.

The above information provides some perspective on the matter.

Except for China, the impact on US allies from the trade war is relatively minor at between one and five percent of total trade between the nations.

The actions against Canada, Mexico, and the EU are more bluff and bluster than a real threat to overall trade and prosperity, though no doubt potentially catastrophic for specific companies and sectors of the economy. At the macro level, the trade war impact on these countries is a pinprick.  China is an exception in that the effect of the tariffs is potentially over 15% of total trade between the countries.

As usual, politics are involved. Foreign countries have taken the strategy of targeting some of their tariffs on products that come from parts of the USA where midterm elections are to take place this year. The purpose of this strategy is to damage Republican election chances and to weaken President Trump.

President Trump is on record and repeats almost daily that the purpose of his trade war is to get a fairer deal for America from its trading partners. This is in view of the fact that America generally imports more than it exports and is running a current account deficit against the rest of the world as a result.

The US current account balance is shown in the chart below.

The numbers look large; however, when one compares the result as a percentage of GDP it again becomes a sideshow.

The rest of the world is content to exchange real goods and services for American dollar credits that are generally saved at the Federal Reserve in the form of Treasury deposits. As a monetary currency sovereign, America can create as many dollar credits out of thin air as it likes in return for real goods and services. The political problem is that the Federal Government does not use its sovereign currency creation privilege to make good the current account deficit with new Federal spending on the domestic economy.  The President’s aim is to reduce the current account deficit and achieve a situation where trade with each country is more balanced.

The term “trade war” is used to describe a situation in which one country applies tariffs to imports from another country, and the other nation retaliates with tariffs of its own.  In some cases, there exists a situation where American goods face a more burdensome tariff than they get in return. Cars and trains are an example: 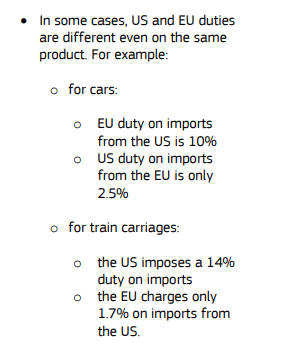 (Source: Trade in goods and customs duties in TTIP)

In a trade war, the enemy shoots at you and at itself, while you shoot at the enemy and at yourself.

With every nation shooting at other nations and at its own people, how do you “win” a trade war? You don’t. All trade wars are lost because the cost base is made higher. Each nation has higher internal nominal costs and receives less real benefits in the form of goods and services.

The hypothetical purpose of a tariff is to protect local businesses from foreign competition. But a tariff hurts the entire economy.  One example: Taxing imported cars would raise the price of all cars because domestic car manufacturers would feel less pressure to hold prices down.

The arguments for any tariff generally fall into two kinds of goals:

Both types of protection = protecting vital industries and job protection – are reasonable goals, but neither needs to be costly to the economy. It is not necessary, or even wise, to “shoot” our own people, in order to protect them from enemy “bullets.”

The table above shows that US consumers will pay an additional $86.9B when they purchase imported goods with a new tariff on them. This is $86.9B that cannot be spent on other goods and services and has increased the cost of existing goods and services and is therefore inflationary. $86.9B is almost 0.5% of GDP and might give the Federal Reserve cause to make a rate increase to stave off this inflationary effect. Then everyone pays more for credit as well. 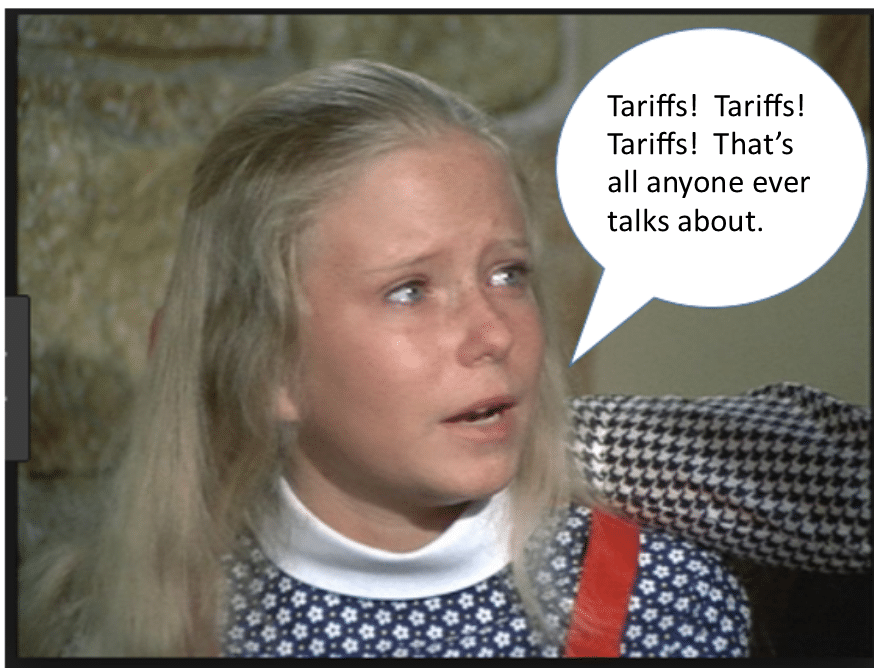 Equity market volatility has increased of late as investors try to decipher the latest salvos of tariff threats coming from the US and other countries. At this point it is too early to guess how all of this will shake out, but there will most certainly be a lot of bargaining and compromises made. We are staying tuned.

Ben manages portfolios for individuals, families and institutions, and conducts equity research. With a long-term investment focus, he employs a blend of fundamental and macroeconomic analysis in selecting securities for client portfolios.