Be a Hipster Investor.  At least with a part of your portfolio.

“Skate to where the puck is going to be” – Wayne Gretsky

“Successful investing is having everyone agree with you………..later.”  – Jim Grant

“Investing is the search for mistakes by others” – Howard Marks

Those are a sampling of quotes that are often cited by investors who attempt to outsmart the market – be it in individual stocks, or sector-rotation, or broad market timing.  But it struck me, as a former San Franciscan during peak-Hipster years of 2003-2006, that the best way to describe “beating the market” is to try and be like a Hipster, at least in areas of your portfolio where you think you have a better view of things than the broader market. 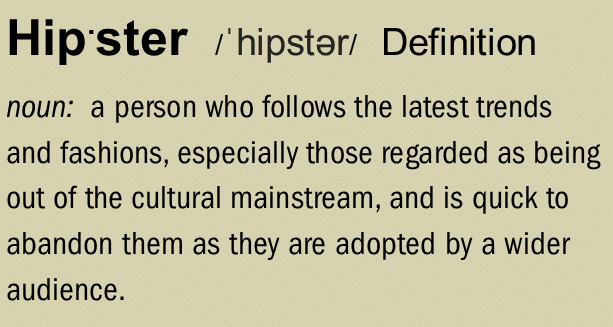 For those who are unfamiliar with the term, a Hipster is (broad generalization alert!) is a person who is very early to adopt a fad or trend (80’s ski parties, Pabst Blue Ribbon, organic coffee), and then once the crowd comes to embrace this trend (TV Show examples The Goldberg’s, Stranger Things embrace of retro-80’s themes), the Hipster is “over it” and off to more original pastures.

To me, it sounds like owning something that is currently unloved by the market, and then once the crowd thinks it is the cool place to be, happily selling to those who are late to the party.  I don’t recommend doing this with the bulk of a portfolio, but it can be advantageous to do this with a portion, for several reasons:

Why act differently than the market – just trying to look smart?

No – taking non-consensus positions must be done with securities that are very well understood, which is achieved by following a limited universe of companies over multiple years.  Understanding the sentiments and proclivities of other investors is hugely helpful when trying to “skate to where the puck is going to be.”  2018 has been a year in which investors – very nervous in the latter stages of a bull market – go from “risk on” to “risk off” with great regularity.  Nominal GDP prints near 6% midyear led people to believe all was amazing with the US economy, and thus investors tossed aside consumer staples companies.   Deeply unloved, structurally challenged, these companies sold for relatively cheap prices while investor sentiment was very high and recession probabilities were very low.  Basically they were an inexpensive portfolio hedge with nearly 4% dividend yields.  Quite tasty for a portion of the Hipster Investor’s portfolio.

As the multi-panel chart below of 4 consumer staple examples illustrates, by Q4 2018 the economic news headlines have worsened and investors have raced to get defensive, pushing many defensive stocks up 20% from May lows – good performance on an absolute basis but even better relative to the market.  In addition to offering decent returns when bought carefully, defensive out-of-favor securities reduce downside in brutal markets, lessening the chance that the investor or client will ditch their strategy at a painful point. 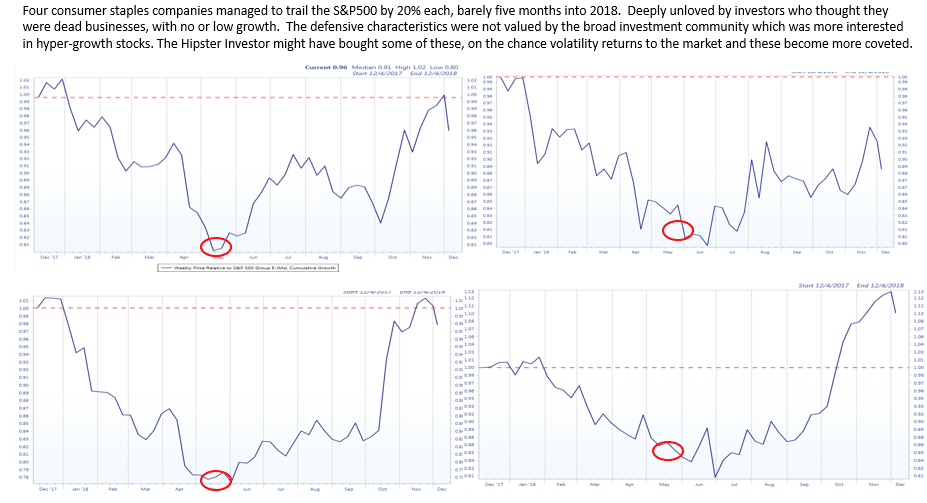