Well, it had been my intention to look into the crowding at the top of the S&P500, and whether there might be better opportunities among the “invisible” smaller weights.  Among the reasons, maybe the less-crowded areas of the market might offer less downside in the event everyone hits the SELL button.  Lo and behold, the market’s action over the past five days has provided some real-time information, though on a sample size that is too small to matter.

The top five largest companies in the S&P500 (Apple, Microsoft, Alphabet, Amazon and Facebook) account for 19% of the entire index.  I went down to the bottom and counted up, and I had to sum the weights of the bottom three hundred and sixteen companies to come up with an equivalent 19% weight.  That strikes me as crazy, and I’d think there is an opportunity here.  When I say these companies are invisible, I’m not really kidding.  When plugged into an excel pie chart, their weights are so meaningless that they don’t even show up in the color image: 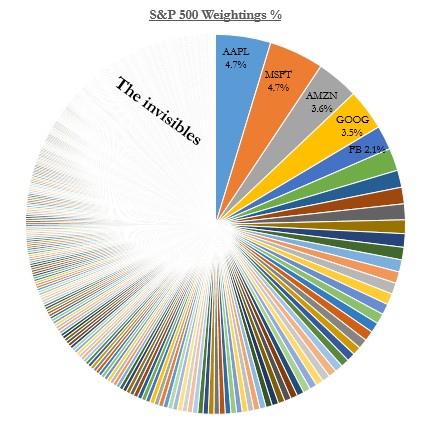 I’m not that interested in making the case that the top 5 should not trade where they are, considering their valuations and gigantic cash flows.  Remember of course, that stock price and valuations are simply the collected wisdom and opinions of investors transacting in their shares.  In December 2018 this wisdom decided Apple’s PE ought to be 11.  In January 2020 this collection of opinions settled on a PE of 24 for Apple. There is simply no correct answer.

The issue is that the numbers are getting so, so, big.  With 4.4 billion shares outstanding, every $1.25 increase in Apple shares is the equivalent to the entire value of Harley Davidson or Macy’s.  And of course both of those companies are facing structural headwinds that could be life-threatening, but at some point these disparities in market value may go too far.  It could be the case that the giants in the SP500 begin to use their highly-valued shares as currency to scoop up smaller companies, but at their size the antitrust concerns will come fast and furious. 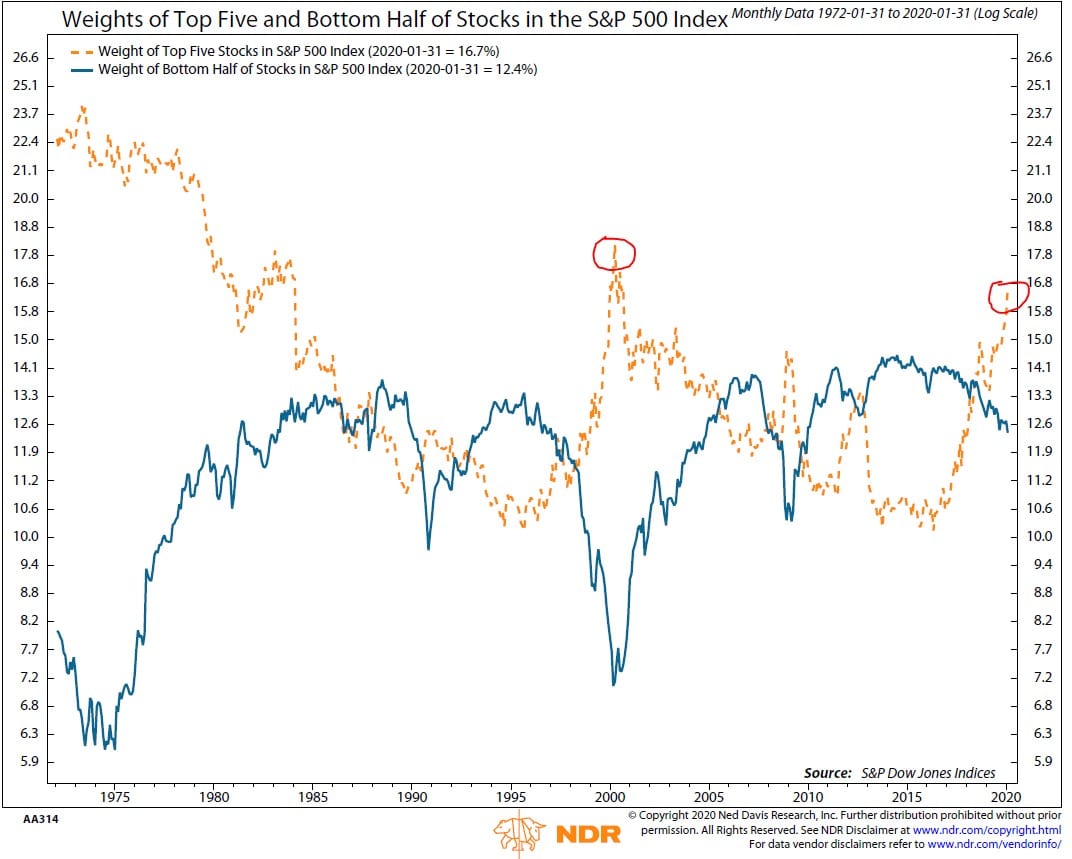 So instead of picking through smaller S&P500 companies looking for ones which might be acquired, I think there’s a better reason to be interested.  And that’s the herd effect – when a company’s weight in the index is .03%, many active investment managers are too terrified (for career-risk reasons) to own a 3% equity position in a company that’s only .03% of the S&P500.  They’re making a bet on this company that is 100-times larger that the competitor index that they are so desperate to not underperform.  Or the opposite –too terrified to own a zero percent position in a company that comprises 3, 4, 5% of the index.

That’s why in some cases “It’s OK to be different.”  There’s opportunity in names that are ignored, but often significant risk too.  The S&P500 is an index of large US stocks.  Companies at the bottom of the S&P500 in terms of size can be there “on the way up, or on the way down.”  By that I mean a smaller company growing up, or a company like The Gap or Macy’s that has deteriorated and shrunk in value.  Our task, if we want to look for value among the invisibles, is to find companies that are small and growing versus small and dying.

What about the passive flows into S&P500 exchange traded funds?  Investors lament that this process is on autopilot and there is less and less price discovery being done by actual investors.  The big get bigger, for no reason other than passive fund flows.  So would this mean that if all investors hit the sell button, maybe the smaller “invisibles” will be hit less severely than the Big Five that drive the market?  That has indeed been the case during this Coronavirus-induced selloff since 2/19.  As I write this, (ugly morning of 2/27), the Big 5 are down 11.7% during this pullback vs down 9.5% for the entire S&P500.

If I must pick the best reason to pay attention to smaller, high quality companies among the S&P500 it would be to trade one high quality growth company for another one that is 1/50th the size, with more opportunity to grow market share in its respective industry.  Smaller company managements may also be able to allocate capital in ways that are easier than for a trillion dollar behemoth with regulators and anti-trust actors breathing down their neck.