Is there Rotation from Growth to Value? And is it meaningful? And can you time it well enough to matter?

November was a big month for the equity markets, with the Dow Jones Industrial Average having its best month since 1987, up nearly 12%.

On the morning of November 9th Pfizer announced impressive Covid19 vaccine news, particularly in regards to efficacy and speed of rollout. Markets moved significantly that day, and it was the “back to normal” companies whose shares jumped the most while in some cases growth shares actually fell. For instance, Amazon, a lockdown beneficiary, fell 5% on the day while Manhattan Real Estate giant Vornado jumped 27%. Huge moves for a single day, and November was only beginning. The following Monday, Moderna released arguably better vaccine news, as their vaccine does not require refrigeration at the extremely low temperatures necessitated by Pfizer’s drug – thus easier to store and administer using in-place infrastructure at most general practitioner offices.

The “vaccine” news brought with it a big rotation. As can be seen below, the stocks that had been lockdown beneficiaries gave back a bit of their 2020 outperformance while the “back to normal” companies who have suffered so much, rebounded sharply. Note though that even after these big moves, the losers are still far behind the winners. Before chasing the rebounding cruise lines, real estate companies and airlines, one must inspect what permanent capital actions they have taken in order to survive the era of virus restrictions. Some have raised large amounts of debt, others have sold equity, and some a mix of both. Most action like these either reduce the current shareholders’ participation in a rebound, or at the least (with big debt issuance) make the situation a bit more of a “levered” upside scenario. “Public LBO” would not be the worst description. 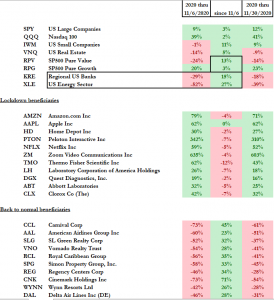 The question for now is, where next?  Value managers have waited a good long time for their moment in the sun -is it here now or is it another fake out?  Keep in mind what has to happen for “value” to beat “growth.”  Banks, materials, and energy needs to beat technology shares (including Amazon and Alphabet, though they’re technically consumer discretionary and communications respectively).  Most comparisons of value versus growth compare the Russell 1000 Growth and Value indexes. The problem is – and I have no idea why they do this -many of the same companies appear in both the growth and value indexes, including Johnson & Johnson, Home Depot and Texas Instruments to name just a few.  For a pure look at the two styles, here’s the SP500 Pure Value vs Pure Growth.  There is no overlap here, and the differences in the two styles is enormous. 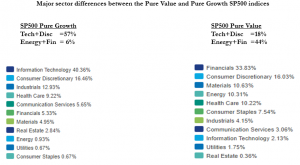 Could there be a significant and long-lasting shift toward value and away from growth?  It’s possible, but it would likely be due to a reversal in investor sentiment, rather than fundamentals and relative earnings-driven outperformance by banks, energy and materials firms.  Higher interest rates would likely be needed, and that’s not out of the question.  Remember, the lion’s share of cash flows for high-growth companies lie farther out into the future than do the cash flows of value and cyclical companies.  Put another way, a larger share of the value of a bank is derived from cash flows coming within the next decade, than it is for Netflix or Tesla.  All future cash flows are discounted back to today in order to calculate the firm’s value.  So a meaningful increase in interest rates reduces the current value of all future cash flows more for growth companies than value companies.  As can be seen below, value outperformance tracks closely with the 10year treasury yield. That yield rises for a number of reasons, but among the most important are that the market is less fearful and there is an expectation of enormous fiscal spending.

One last reason value could re-emerge earlier than expected?  Because the stock market likes to make fools of people and their predictions.