Home » Blog » Partisan Conflict: Is this about IDEOLOGY or MONEY?
Blog

Most Americans of voting age probably see today’s political environment as the most contentious ever, and the Philadelphia Federal Reserve Bank would certainly agree.  Among the mountains of data the “Philly Fed” compiles and studies is an unusual study, its Partisan Conflict Index.  This index surveys the number of articles concerning political contention that appear in major newspapers monthly and then compiles a score.  The study was designed by Marina Azzimonti, once a Philly Fed employee, and the Philly Fed’s version includes monthly scores since 1981.  Its calculations show that, regardless of Republican or Democratic presidents, the level of political conflict in the U.S. held steady for 27 years through 2008.  However, since the sharp recession begun in 2008 and the controversial presidencies of Barack Obama and Donald Trump, the Partisan Conflict Index score has turned sharply higher and hit a record high score in March, 2017.  Is all this rancor just about presidential personalities or radical ideologies, or is there something else going on here? 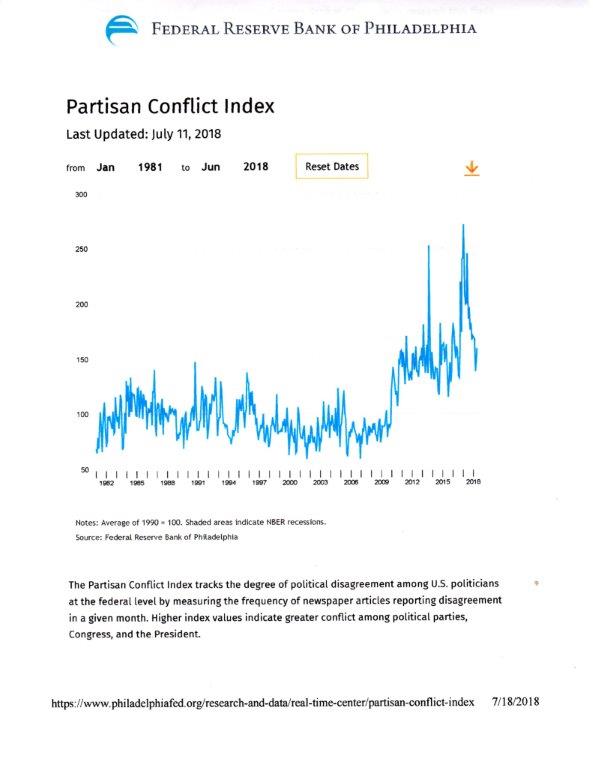 Ms. Azzimonti, outside of the Philly Fed, extended her research on political conflict as far back as 1891, which marked the 18th year of a long depression following a national bank collapse in 1873.  At that time, partisan conflict was very high, but it began to recede following the discovery of gold in the Klondike in 1896 and a subsequent period of prosperity fed by newly available credit and the continued conversion of our economy away from agriculture toward manufacturing.  Azzimonti’s research shows partisan conflict to have persistently receded until the stock market crashed in 1929, bringing on unemployment, hunger, homelessness and radical new economic policies from the Franklin Roosevelt administration, which sought to create jobs and redistribute wealth for the benefit of FDR’s “forgotten man.”  Azzimonti’s measurement of conflict only subsided for good with the onset of World War II and then the decades long post-war prosperity built in the 40s, 50s and 60s.  According to Azzimonti’s calculations, the past nine years have been only the third crisis of conflict the nation has experienced since 1891.

Azzimonti’s data shows that high “partisan conflict” scores correspond with periods of intense anxiety concerning lower and middle class incomes.  Confirming this linkage is data compiled by Ray Dalio, the CEO of hedge fund management firm Bridgewater Associates.  Dalio, a student of history, recently compiled data since 1910 comparing the distribution of incomes between the ultra-wealthy 0.1% (the “few”) and the working class 90% (the “many”).  What he found was that the wealthy 0.1% earned as much income as the working class 90% during much of the 1910s and 1920s.  This was the era of corporate titans whose names now grace banks, foundations and museums.  Meanwhile, the 90% “many” worked hard for meager wages that almost or just covered the costs of feeding their families.  The massive disparity of incomes between the few and the many only reversed following the Great Depression, Roosevelt’s redistribution of wealth through taxes and government benefits, and the onset of World War II.

According to Dalio’s numbers, by the mid-1980s, the “many” were earning 35% of the nation’s income while the “few” were earning less than 10%, the closest to equality in the 20th century.   However, another shift toward growing inequality began in the 1980s as business learned to replace expensive U.S. labor, either with much cheaper offshore workers or with automation.  By 2008, the shares of national income earned by the “few” and the “many” were back to levels seen in the 1920s, and the working class 90% were again anxious about their futures and their means to pay their bills.

In 2008, many voters voted for “change” and elected a progressive political newcomer, Barack Obama.  In 2016, the same nation repudiated Hillary Clinton, the successor to Obama’s policies, and elected another “change” agent, the business mogul Donald Trump.  Obama and Trump share very few attributes or viewpoints, but the nation voted them into office just 8 years apart.  One of the only credible explanations is that George Bush’s inability to address stagnant working class incomes elected Obama, and Obama’s inability to solve the problem elected Trump.  If Trump fails to meaningfully correct the income and wealth imbalance, expect more conflict and more political surprises in the years to come.