No, I’m Not “The Meanest Divorce Lawyer in Town”

Divorce has been called “the psychological equivalent of a triple coronary bypass.”1  Many believe that lawyers are largely to blame for the enormous psychological and financial damage caused by the divorce process.  That’s not surprising, given the fact that in a recent Gallup poll, lawyers were included in a list of the least trusted professions, with only 18% of those responding to the poll saying that the legal profession has very high/high honesty and ethical standards.  Some, like television host Craig Ferguson, believe that “Divorce lawyers stoke anger and fear in their clients, knowing that as long as the conflicts remain unresolved the revenue stream will keep flowing.”  With all due respect to Mr. Ferguson, his statement is a gross overgeneralization.  I’ve been practicing law for over 30 years and my practice is limited to family law.  I know lots of family lawyers, and most of them are decent, caring people who practice family law because they want to help their clients navigate their way through one of the saddest, scariest, most traumatic experiences of their lives.  Most family lawyers attempt to reduce, rather than exacerbate and exploit, their clients’ anger and fear.  Being a family lawyer is a calling; there are much easier, less stressful ways to earn a living! 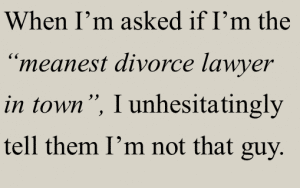 The family lawyers who “stoke anger and fear” are outliers.  Unfortunately, there’s a market for those outliers.  Some people faced with the prospect of divorce intentionally seek out the meanest, most aggressive lawyer they can find to represent them.  They often do this out of fear.  Having a “strong” lawyer makes some clients feel safe and protected.  Clients sometimes seek out mean or “aggressive” lawyers because they want to inflict as much pain on their spouse as possible.  When I receive calls from prospective clients who ask me whether I’m “the meanest divorce lawyer in town”, I unhesitatingly tell them that I’m not that guy.

Seasoned family lawyers understand that our practice area is inherently different from other practice areas and that, for a multitude of reasons, our cases ought to be handled as nonadversarially as possible.  Calling myself a “family lawyer” rather than as a “divorce lawyer”, reminds me that I’m not only representing an individual in the dissolution of his or her marriage, I’m dealing with someone’s family.  The parties in my cases were once in love with one another; they planned to spend the rest of their lives with one another; they promised to love, honor and cherish one another for the rest of their lives; and in many instances, they have children, who are the innocent victims of their parents’ failed marriage.  There’s a direct relationship between the level of acrimony in a divorce and the extent of the emotional and financial damage to the entire family.  The best predictor of a child’s ability to adjust to their parents’ divorce is the extent to which the parents are able to get along with one another during and after the divorce.  The more acrimonious the divorce, the less likely the parents will be able to successfully co-parent their children after the divorce, and the more likely it is that the children will suffer, emotionally, as a result.

Lawyers are indoctrinated into an “adversarial system of justice.”  We’re taught that parties in lawsuits are necessarily “adversaries”.  (“Adversary” means “enemy.”)  While the adversarial system of justice may be a good model for some practice areas, it’s generally not a particularly good one for family law cases.  Fortunately, there are several alternatives to litigation, referred to as “ADR” or “Alternative Dispute Resolution.”  In fact, the vast majority of divorces are resolved without a trial in which a judge or jury decides the issues.  Some forms of ADR, like mediation and arbitration, are widely known.  Others, like Late Case Evaluation or Judicially Hosted Settlement Conferences are less widely known.  And other forms of ADR still remain widely unknown; like  Collaborative Law. 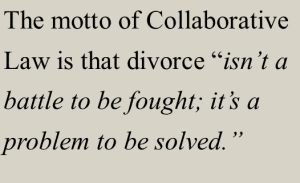 An essential component of Collaborative training is the “paradigm shift.”  We’re taught that, instead of seeing ourselves as zealous advocates in an adversarial system of justice, we need to view ourselves as members of a Collaborative Team whose mission is to resolve the issues in the divorce in a way that’s fair to both parties and that promotes the best interests of their children.  The motto of Collaborative Law is that the divorce “isn’t a battle to be fought; it’s a problem to be solved.”

Collaborative Law is a voluntary process.  The husband and wife have to agree to have a Collaborative Divorce and they each have to hire their own Collaborative attorneys to represent them.  (A persistent misconception about Collaborative Law is that one attorney represents both parties, which is an inherent conflict of interests.)  The parties and attorneys enter into a written Collaborative Agreement in which they promise to abide by the tenets of Collaborative Law.  Either party can withdraw from that process after giving proper notice to the other side.  Nothing is filed in court until the parties reach an agreement, which is then drafted by the attorneys and signed by the parties.  There is no pending litigation during the Collaborative process; therefore, there’s no “formal discovery”.  The parties obtain information from one another informally and cooperatively.  (This is an enormous cost savings for the client.)  The parties and their attorneys meet together in what’s called “4-way meetings” to discuss the issues in the divorce and try to reach an agreement resolving those issues.

If the case settles in the Collaborative process, the Settlement Agreement is filed with the court, along with the Complaint for Divorce and other paperwork, and the parties have what’s referred to as an “uncontested divorce.”  In Georgia, the court may grant the divorce after thirty days.  If the case doesn’t settle in the Collaborative process, both Collaborative attorneys are prohibited from representing the clients in the litigation process.  (That final and somewhat controversial requirement is the “special sauce” added to Collaborative methodology by Stu Webb.)

After practicing Collaborative Law for almost two decades, now, I’ve learned that it’s not for everyone.  Potential Collaborative candidates need to undergo “extreme vetting” by their lawyers.  Successful Collaborative divorces require divorcing parties to interact and communicate with one another maturely and respectfully  and put fault and blame aside at a time when they feel most angry, hurt and vulnerable.  Not everyone can do that.  But for the remarkable individuals who are able to rise to their finest hour, even in the emotional haze of divorce, the potential benefits for the entire family (as well as the attorneys and the court system) are enormous.  Those motivated by hatred and contempt for their spouses and a desire to extract their pound of flesh may misguidedly retain “the meanest divorce lawyer in town,” after which they will, no doubt, define divorce as did the late comedian, Robin Williams: “Ah  yes, divorce from the Latin word meaning to rip out a man’s genitals through his wallet.”

1That quote is attributed to author Mary Kay Blakely.