Interest rates rose sharply in apparent anticipation of an increase in rates by the Federal Reserve later this year. The yields on 10-year and 30-year Treasuries ended the quarter at 2.35% and 3.12%, respectively, compared to 1.92% and 2.54% at the end of the first quarter.

In an effort to keep our clients informed we would like to briefly discuss some issues making the rounds in the financial press. The financial troubles in Greece are again in the news. Greece was expected to make a payment of $880 million to the International Monetary Fund (IMF) in the first week of June but delayed that payment apparently as a negotiating tactic. This is just one of many payments due over the summer with a payment of $4 billion due at the end of July as repayment for one of its earlier bailout packages. The country received a bailout of $123 billion in 2010 and another for $146 billion in 2012 from the European Central Bank. Members of the Eurozone and the United States are increasingly reluctant to offer additional bailouts or more flexible terms on existing bailouts until fiscal reforms are in place in Greece. Creditors are demanding reforms to labor markets allowing more flexibility in hiring and firing. Pension reforms that would reduce rich payouts and raise the retirement age are also high on the list of requirements. The goal is for the new budget plan of the Greek government to reach an acceptable surplus excluding the payments on old debt.

Unemployment is a staggering 25.7%, down from the peak of 28.0% several years ago but the improvement is hardly encouraging. The social unrest led to the election of Prime Minister Tsipras, a political outsider, in January of this year as he promised to reduce the levels of austerity being proposed by Greek leadership at the time. Yields on Greek government 10-year bonds rose from 6% in the summer of 2014 to over 11% as of the writing of this letter as Mr. Tsipras emerged as the front-runner and eventually won the election. The extremely high yields are themselves a vote of “no confidence” by the global capital markets regarding his proposals. As of July 1, Prime Minister Tsipras had called for a referendum allowing all Greek citizens to vote on the proposed austerity package proposed which would enable the bailout to continue.

In 2011, when fears of Greek government default first arose, European banks were far more exposed to such a default and capital levels were much lower. Since then, new government regulations in the Eurozone have led to much higher capital levels and subsequent divestitures of much of the risky debt. Most data today show a default by Greece would negatively impact European governments that own such debt but that it would be manageable while private banks would be less impacted. Any impact on US banks is expected to be even less with most US banks having no exposure to Greek debt.

The issue of rising margin debt has also been in the news. Again. Buying securities on margin is only allowed in taxable accounts and involves the investor borrowing money from the brokerage firm in order to buy stocks. Typically, 50% of the purchase is required in cash, which effectively allows the investor to buy $100 worth of stock for $50. This works out well if the stock rises but if the stock falls the investor still owes the brokerage firm the original $50 that was loaned. Once the stock falls below a certain amount relative to the loan, the investor can receive a “margin call” where additional cash must be deposited in order to hold the stock or sell the stock in order to repay the loan. Margin debt in the US is at an all-time high but so is the stock market which is the asset backing that margin debt. Historically margin debt has risen in lockstep with the market and recent news articles suggest that high margin debt could lead to a bear market or strong correction. After reviewing many decades of data on margin debt and coincident stock prices, our analysis failed to divulge any secrets to timing market crashes. Our lack of discovery is consistent with several quantitative researchers that we trust. There does not appear to be any credible link between margin debt and subsequent stock market performance. This is another great reminder that the aim of financial news outlets isn’t to improve your investment returns but to keep your eyes glued to their channel or website. There are gems in these outlets from time to time but just like gems such discoveries aren’t the norm.

AND NOW FOR SOMETHING COMPLETELY DIFFERENT… 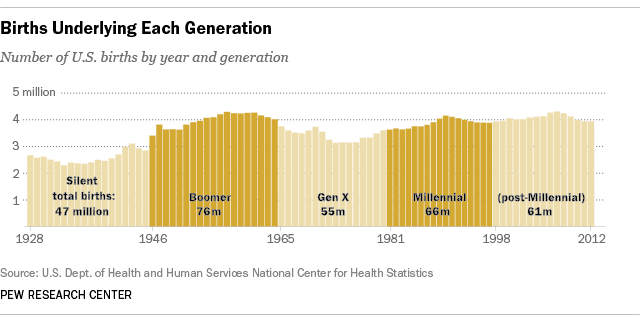 In the last century, various generations have received labels by demographers in an attempt to define them by some number of shared characteristics. According to the Pew Research Center, since 1946 three different generations have been named with each spanning roughly a 20-year period. The Baby Boomers began in 1946, Generation X began in 1965, and Millennials began in 1981. Post-Millennials also began in 1998 and will apparently need to petition for a cooler name. The Millennial generation is breaking the rules compared to other generations in their depth of education, their debt load, and how they form households. These broken rules may be useful as we consider how their behavior and future decisions should influence investment decisions.

Millennials win the award for most educated generation by a wide margin. In 2013, more than 40% of college-age Millennials (ages 18 to 24) were enrolled in college. This is much higher than the 30% of Generation X that was enrolled in 1993 at a comparable age. Costs for college have been rising well above the rate of inflation for years and, while there are many competing theories, it may simply be a case of demand being greater than supply. Ned Davis Research points out that in 2009, 70% of recent high school graduates were enrolled in college, a record enrollment rate. For decades, the case has been made that a college education led to higher earning potential and it appears that Millennials listened well. While this is well supported by the data, it is important to consider how many jobs will be available for a given level of education. The Bureau of Labor Statistics (BLS) forecasted job growth for various industries and job types from 2012 to 2022. That forecast shows that 15.6 million jobs will be created during that time but only 44% of those jobs will require a college degree. Ned Davis Research further reports that if the current rate of education continues, there will be an increase of 5.4 million bachelor degrees but the BLS forecast includes only 3.1 million jobs that will require them. With the high level of flexibility and low startup costs brought on by the Internet, it is reasonable to assume that some of that oversupply of educated labor may lead to higher levels of entrepreneurship and innovation. It may also lead to downward pressure on wages.

Wage pressure already seems to be present for Millennials which may be caused by multiple factors including uneven growth in the US economy. According to Ned Davis Research, the median pre-tax income for Millennials was $35,300 in 2013. Compare this with Generation X in 1995 with an inflation adjusted pre-tax income of $38,900. Many investors and pundits have expected new growth in housing to be generated by Millennials but have thus far been disappointed as that growth has fallen well short of forecasts. The lower wages along with the higher debt burden from student loans are likely serving as major impediments to members of this generation stepping out and buying their first home. In 1995, the data for Generation X shows that 24% of households had student loan debt while 42% of Millennial households in 2013 have student loan debt. In addition, the median value of that debt is $17,200 for Millennials compared to $6,000 for Generation X, adjusted for inflation (NDR).

There is a bit of a silver lining to this higher student debt load, however. Millennials have been far more disciplined about other consumer debt such as credit cards and auto loans. The median total debt level is $31,100 which is far lower than for the same age group in any year since 2001, according to the Federal Reserve Triennial Survey of Consumer Finances.

This confluence of financial factors is largely responsible, many believe, for the lower household formation among Millennials. According to Ned Davis Research, about 30% of Millennial adults live with a parent. Historically, this age group (18 to 34 year olds) has only 24% of its members living with a parent. If this mix returns to its historical levels, roughly 5 million young adults would move out of their parent’s house. Other research from the National Association for Real Estate Investment Trusts (NAREIT) suggests that there is pent-up demand for new household formations of 3 to 4 million. The percentage of the Millennial generation that is married is only 25%, far lower than the 35-40% rate for Generation X when they were at the same age. New household formation driven by marriage and singles sharing expenses has historically been a strong driver of consumer spending. A review of some of these defining factors of the Millennial generation may help us to make more thoughtful investments going forward as we seek to understand the context in which spending decisions of Millennials are made.

Stock and bond prices have not changed significantly since our last letter, and our attitude concerning them is unchanged. In general, US stock valuations are above historical norms, so conservative investors are reasonable to maintain only modest allocations to them. However, we see no economic event likely to trigger a large decline, so aggressive investors are not unreasonable to risk their capital by maintaining large allocations to stocks. Bond yields are low in comparison to history and current inflation, but there is no clear catalyst to drive interest rates materially higher. Bond yields don’t “work” to meet many retirement income targets, but money market yields at zero don’t work either. We believe that holding money market reserves gives investors flexibility to respond to unexpected negative events, however, a potentially valuable benefit. But with no obvious negative trigger on the horizon, we expect the investment community as a whole to continue buying stocks and bonds, keeping prices high for the foreseeable future.

We welcome your thoughts and comments and are honored that you have chosen Montag to manage your investments.