As a continuing evolution of the quarterly letter we have separated our comments into two sections, a brief overview of market returns and key news items, followed by a “Deeper Dive”, a more detailed view regarding one theme we find of particular interest. We hope you enjoy both.

Interest rates increased modestly for the quarter and the year. The yield on 10-year Treasuries ended the year at 2.27% compared to 2.04% one quarter ago and 2.17% at the end of last year.

The most talked about news item of the quarter was the much anticipated increase in short-term interest rates by the Federal Reserve Bank (“the Fed”). Over the course of 2015, various data points such as employment and economic growth caused pundits and experts to speculate that an increase in rates by the Fed was coming. Later in the year, volatility in the global capital markets caused many of the same pundits to reverse that position. The rollercoaster of these expectations is a reminder that forecasting such moves is more art than science and may have minimal impact on investment returns. However, by October, there was sufficient strength in employment and wage data to suggest the Fed would finally raise the rate on Fed Funds for the first time in more than 10 years. The short-term Fed Funds rate is the rate that commercial banks charge each other to borrow money overnight. Banks lend for such short time spans when they have more money than they are required to have on hand by regulators. Consequently, banks tend to base other loan rates for their customers on this overnight rate.

On December 17th, at their regular meeting, the Fed raised the overnight Fed Funds target to a range of 0.25-0.50%, effectively raising rates a quarter of a point. The reaction of the equity and fixed income markets has been muted as the majority of investors were expecting this step. On average, when the Fed begins raising rates after the economy has been growing for several years, stocks continue to perform well for some time. There have been many articles written about this subject over the last year but we believe it is important to focus on the beginning of that statement: “on average.” The current environment is one where short-term interest rates have been near zero for roughly 7 years. This condition is unprecedented. It is clear from the high valuation placed on stocks with dividends that many investors that have been unable to find sufficient income from bonds, due to the low rates, have moved their focus to large cap stocks with dividends. With such a backdrop, a steady rise in rates may not lead to average returns seen in prior market cycles if these investors shift to bonds. 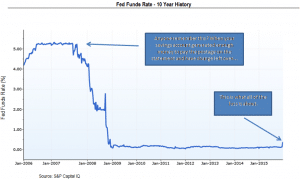 HOW DOES THIS AFFECT OUR INVESTMENT THINKING?

As noted in our last letter, our expectations for returns of the US equity market are driven by the earnings expected of companies in 2016 and the amount that investors are paying for these earnings. The ratio of a stock’s price to its earnings (price/earnings ratio), the P/E ratio, is an indication of expectations for a given stock. Indexes representing the overall stock market such as the S&P 500 Index can also have a P/E ratio when earnings and prices from the companies in the index are aggregated. For the S&P 500 index, the P/E ratio has risen in the last 6 months with little movement from prices. Part of this behavior is due to the poor earnings from the beleaguered energy index but many other companies have reported less than stellar results as well. As trailing earnings growth has slowed, the “E” in the P/E ratio has declined while the “P” (price) of stocks has been steady. The average P/E of the stocks in the S&P 500 is now 26, a high historical level.

With the P/E of the overall market at such a high level we continue to be cautious about future returns. The long-term link between starting valuation and subsequent returns is a very strong one. Expectations for earnings growth in 2016 have begun to decline as companies reported more muted earnings growth in Q3 and we believe those expectations will decline further which could negatively impact market returns. Revenue growth has slowed over the past few years but companies have been able to generate earnings growth by improving their profit margins or the amount of profit they make from each dollar in revenue. However, data in the last few quarters suggest that profit margins have probably peaked which leaves revenue growth to drive earnings.

We continue to believe that further expansion of the market P/E is possible but unlikely without strong fundamental improvement such as stronger than expected growth in margins or revenue. The chart below shows the S&P 500 index (shaded area) along with the P/E of the index (solid line) over the last 3 years. The area in the red box shows that since February of this year the market has moved little yet the P/E ratio has increased from 19 to almost 23. Valuation, represented by the P/E ratio, has increased as earnings declined. Note the P/E here is different from the average stock mentioned on the prior page, which is 26, due to the construction method of the index. However, the conclusion from each data point is the same: stocks are expensive.

The equity market rallied strongly in the fourth quarter of 2015 after falling in the prior quarter. Volatility increased as it often does in the latter part of a bull market and we suspect this condition will continue for the foreseeable future. US stock valuations are above historical norms, while there are few alternatives for investors seeking an attractive return. However, many expect the Fed will continue to raise rates, perhaps as much as an additional 0.75% over the next year. If rates do rise, some equity investors may choose to move assets to bonds. In this changing environment, we let our diligent and thoughtful research process guide us, as it has for many years, which may lead to reduced equity exposure and higher cash balances. We manage the assets entrusted to us with a long-term view and strong desire to manage risk in challenging markets.

We welcome your thoughts and comments and are honored that you have chosen MONTAG to manage your investments. We hope the additional material, focusing on possible reasons for weak wage growth among the middle-class, is useful to you.

A DEEPER DIVE: AN ANALYSIS OF THE MIDDLE-CLASS EXPERIENCE AUTUMN 2015

During the current economic expansion, much ink has been spilled regarding the lack of participation by the middle class in the growing economy. It is a problem that has, of course, gained attention of almost all politicians as they each seek to offer their brand of solutions. In the brief synopsis below, where much of the content was provided by Bloomberg News, we will review various theories about the cause of weak growth of employment and wages among this group and offer some empirical support.

Over the course of the last two economic cycles, beginning in 2003, several theories regarding the reason for lesser participation by the middle class have been proposed. The three main theories are an increase in automation or use of robots, a decline of union power in the labor market, and the rise of China as an outsourced manufacturer.   With Americans’ love of gadgets, the automation theory is enticing and robot usage in many industries has increased but, so far, the evidence to suggest that declining labor participation and stagnant wages are caused by robots is present but slim.

A research paper from the National Bureau of Economic Research published this year examines the impact of outsourcing to China on various industries in the US. The paper looks at wages within those industries and finds that where exposure to China is greater, the wage declines were larger compared to industries with less exposure. Another paper produced by the Federal Reserve Bank of San Francisco found that industries with the greatest exposure to offshoring, or manufacturing outside the US, had greater declines in wages than other industries. The Fed paper also found that there was some impact from automation and the increased use of computers, as well declining unionization, but these were small in comparison to offshoring. Finally, a paper written in 2013 led by an economist from MIT evaluated only the offshoring component. The chart nearby is from that paper and shows the impact on the number of manufacturing jobs represented on the right axis as the percentage of the US population employed in such jobs. Manufacturing jobs have been one of the most significant ways for middle class workers to grow their wealth as they move from unskilled to skilled and highly skilled jobs over time. The reduction of the manufacturing opportunities appears to support a portion of the middle stagnation that has been observed over the last few decades. 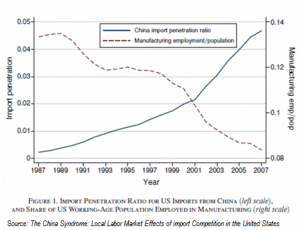 The data and conclusions from the various papers presented beg for a solution, of course. Unfortunately, no easy solution exists. Trade barriers and tariffs to protect labor have had many adverse impacts in the past and with the increased globalization that exists today the effects would likely be worse than in prior economic periods. The US has not been alone in its efforts to pursue global supply chains in order to reduce costs so protectionism steps could well exclude the US from fast growing markets such as China and India.

The silver lining, while less shiny than most would prefer, is that wages in China have been growing at a furious pace which reduces the attractiveness of offshoring in some cases. Low energy costs in the US have lured some foreign companies in energy intensive industries to locate here to be competitive. Waiting for foreign wages to rise and make offshoring less attractive is not the answer that most people want to hear but there may be few alternatives. These findings may not impact our investment decisions immediately but they do remind us that there is great value in questioning conventional wisdom, such as the inevitable rebound of the middle-class, as there are often changes occurring which aren’t readily apparent.