It takes 12 to 18 months for any form of stimulus – tax cuts, increased government spending, or direct payments – to work fully through the economy. The US and the rest of the world are just now feeling the effects of the first rounds of stimulus. The more recent payments and potential stimulus bill will add additional spending to GDP growth which is already at 9% – levels last reached in 1984 and before that the late 1950’s. Don’t let the normal emergence of spring fool you. We are still in unprecedented times.

All this cash has led to a media fixation on inflation. We invest for generations at MONTAG. By definition, we are long term investors. Right now, we view potential inflation as one of the biggest factors to watch and understand over the next few years. Ever since Paul Volker whipped inflation in the early 1980’s stock investors, bond investors, and real estate investors have enjoyed a backdrop of declining interest rates which, typically, leads to rising asset prices. 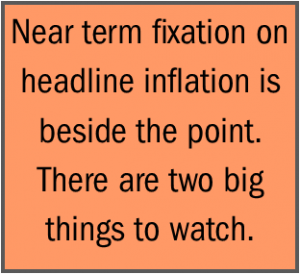 Over the next few months inflation readings will appear to be high. We are comparing it to the period when we all went into our homes and wondered if we needed to sterilize the mail, at the beginning of the pandemic. No one was buying anything and prices fell. We are starting to buy again and drive again, and this will drive headline inflation. This is all beside the point. There are two big things to watch. One is a usual concern during periods of growth and the other is new.

The first is the rate of unemployment which is falling – fast. Last March, the rate of unemployment was 4.4% and rose to 14.8% and today is at 6%. A majority of the unemployed work in the travel and leisure industry. If US activity follows China, we are all about to start traveling again. The rate of unemployment will be back to pre-pandemic levels quickly. Wages represent one of the largest expenses for many companies. In fact, professional service companies – which spend about 40% of revenue on salary and benefits – are seeing significant increases in salaries as they compete for new talent to complete all the pent-up work that was not done over the last year. Deloitte is giving bonuses and even Goldman Sachs has reduced work hours for young associates in an effort to offer a better work/life balance.

The second issue is the current shortage in semiconductor chips. It’s real and it’s reducing supply of everything from Play Stations to F-150’s. Samsung, one of the largest chip manufacturers in the world and the largest cell phone maker in the world, canceled the production of a high-end phone because it could not get enough chips. But the more important issue is that technology has been a deflationary force as more software moves to the cloud. This technology offered very low-cost solutions based on a falling cost of computing power and memory. With chips in short supply, this could be under pressure and drive expense in an area that had been driving deflation. 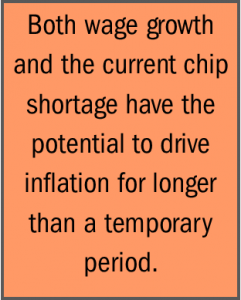 Both wage growth and the current chip shortage have the potential to drive inflation for longer than a temporary period. There are offsets to both. For instance, if labor participation, which has been falling since the start of the pandemic, reverses as life re-opens that would provide additional workers and slow wage growth. Recently, Samsung, TSMC, and Intel announced a significant increase in capital spending for new chip factories to ease supply issues. This will take a few years to get into place and companies may have to rely on older generation chips until then.

Our firm has been investing for the past 43 years – two generations of the Montag family. Only the first five of those years occurred during a period of rising inflation. We invest for long term appreciation that the public markets provide. A change in inflation will alter our focus toward sectors of the market that will benefit from pricing power and a potential for increasing interest rates.