In the last blog post, we introduced the idea that artificial intelligence (AI) might be the fourth big technology wave of the past 250 years, potentially disrupting the world economy in profound ways.  AI has been around in embryonic form for decades, but an advance in the technology in 2012 called “deep learning” is catapulting the technology closer to a time when it can replace, not just assist, some workers.  Recognizing patterns amidst data has always been a specialty of the human brain, not computers, but those days now appear to be numbered.  What “deep learning” requires is massive amounts of data (now cheaply available on the Internet or in memory caches at Facebook, Google, Amazon, etc.), massive processing capacity (now available in modern semiconductors) and a very, very smart algorithm.  An algorithm is simply an instruction manual for performance of the task, coded in digital symbols that the computer can read.  Already, smart algorithms permit computers to perform the tasks of facial recognition, speech recognition, autonomous driving and other data-driven decision-making.  For example, by 2017, analysts at J.P. Morgan estimated that 70% of daily stock trading volume was being placed by computers, not human investors.  Undoubtedly professional investors specified the criteria coded in the algorithms that drove the computers to buy or sell, but much of the selling in the last two months of 2018 was almost certainly placed by computers.

In his 2018 book “AI Super-Powers”, speech recognition pioneer and AI expert Kai-Fu Lee sorted various occupations into quadrants based upon the risk of replacement by AI.  The jobs that he sees at greatest risk from AI include radiologists, customer service reps, personal tax preparers, insurance adjusters, consumer lenders, telemarketers, teller/cashiers, truck drivers, assembly line inspectors, fruit pickers and food preparers.  The more repetitive the task, the more likely it is to be displaced by AI.  In contrast, jobs he regards as completely safe are highly social and non-customizable, such as hair stylists, physical therapists, caretakers for the elderly, dog trainers, concierges, social workers, psychiatrists, criminal defense attorneys and CEOs. 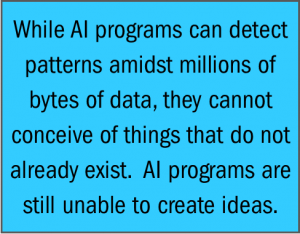 What is the best defense against AI taking away your livelihood?  MIT professor Erik Brynjolfsson writes, and Kai-Fu Lee concurs, that AI programs are still unable to create ideas.  While AI programs can detect patterns amidst millions of bytes of data, they cannot conceive of things that do not already exist.  Lee states that the basic technology to turn machines into sentient beings, such as the menacing Hal in the movie Space Odyssey, does not exist and may not for several more decades.  Oddly enough, AI also cannot produce in robots the level of dexterity humans enjoy with their limbs and fingers.  We will still need carpenters decades from now.

Any large-scale replacement of human labor with AI-driven smart machines would only exacerbate current trends of income inequality and greater political polarization.  Lee’s great hope is that, for most jobs, AI performs the analytical tasks but humans counsel their customers and make the final decisions.  For example, even if AI learns to diagnose diseases far more accurately than humans, would future patients authorize expensive or risky treatments without the confirming counsel of a human medical professional?  If an AI-driven portfolio management program told its human investors to sell during a stock market rally or buy during a steep decline, would those investors do so without a confirming opinion from an experienced investment professional?  Time will tell.

Not all experts that have studied the growth of AI agree with Lee’s assessment that up to half of all jobs will be altered or even replaced by 2030.  The consulting firm McKinsey believes that 50 per cent of tasks currently performed by humans can already by automated, but McKinsey believes that only about 30% actually will be and that only 14% of workers will be laid off in those areas.  Even more optimistically, the OECD thinks the percentage of workers displaced will be only 9%.

But consider one example of the accelerating pace of change in AI technology, an object recognition competition named ImageNet.  Launched in 2010, ImageNet teams competed to write the most accurate object recognition algorithms to identify thousands of everyday objects.  In 2012, the breakthrough of “deep learning” AI technology enabled one team to achieve a record-setting object identification error rate of only 16%, far better than the previous standard of 25%,   But just five years later, almost every ImageNet team had driven their algorithm’s error rate below 5%.  Rapid gains in accuracy are also being achieved in the AI realms of speech recognition, machine reading and machine translation.  The future is coming faster and faster.

At this moment, the U.S. holds a commanding lead in AI technology.  Google is the kingpin, followed by Amazon, Microsoft and Facebook (in no particular order).   However, the Chinese are on our heels; three of the top seven world leaders in AI technology are the Chinese firms Alibaba, Baidu and TenCent.  And two months after AlphaGo’s defeat of Ke Jie in 2017, the Chinese government set clear goals to become the world’s leader for research and application of AI technology. 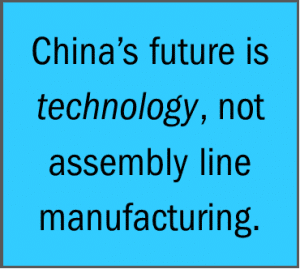 Chinese venture capital investors like Lee responded, and in 2017, Chinese investment in AI was 48 per cent of the global total, surpassing American venture funding of AI research for the first time.  China’s future is technology, not assembly line manufacturing.

In the end, whether the AI revolution turns out to be an economic tsunami or merely slow ripples of change, one thing seems certain.  Global labor, skilled and unskilled, will be under even more pressure, and the national governments that best cushion the inevitable labor adjustments will enjoy the greatest political stability.  Managing this process to quell extremist views will be in everybody’s interest.  Whether the U.S. will be up to this challenge remains to be seen.