During this series, we’ve mentioned several times that automation, robotics, and Artificial Intelligence (AI) are great disruptors for many industries.  While it can certainly be argued that efficiencies are realized with machines doing work, or thinking, for certain industries, it begs the question:  What happens to the people that these machines displace?

My colleague Brendan Wagner has mentioned a few times how large corporations, who used to employ people in their accounting departments to keep track of payroll, accounts receivable and accounts payable, have been largely displaced with technology that can do those jobs faster.  As a result, these companies not only are more efficient by the numbers, but also get a boost from having to pay less in payroll taxes, because there are less people to pay. 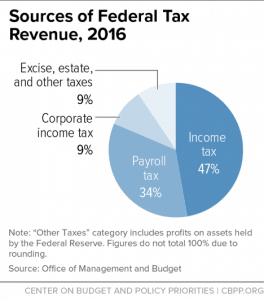 The federal government probably does NOT love this phenomenon.  Take a look at the pie chart, and you can see that a huge chunk of our government is funded by payroll tax.  And further, if less people are employed as a result of being displaced by technology, the other large chunk of federal funding derived from income tax probably takes a hit as well.

Enter the concept of the robot tax.

Bill Gates has been one of the most famous/prominent advocates of INTRODUCING this tax, and it is not just a domestic phenomenon.  The Organization for Economic Cooperation and Development, or OECD, is an international consortium of over 30 democratic nations, and their members have DISCUSSED the same thing.

Economic concepts like income inequality and the implementation of an efficient robo-tax system quickly become very academic, as shown in THIS paper by Northwestern University. However, the paper does float the idea of a lump sum rebate that corporations would pay the federal government, to equalize out the effects of automation. In theory, this would keep the government coffers from being choked off, as well as protecting the American worker from an income equality standpoint.  Again though, this is all theoretical.

Yes, there are dissenting views as well, as The Economist put THIS out last year arguing against the taxation of robots, instead viewing automation and human workers as having a more symbiotic relationship.  The debates rage on, and in a world where we have machines like THIS that can act eerily human, should they be taxed as such?  More human, THAN human!